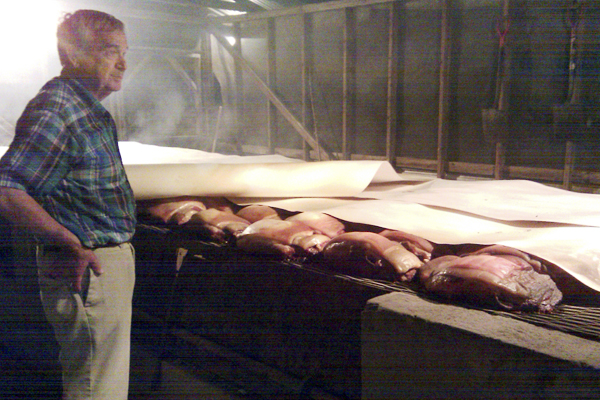 JEFFERSON – In the same way that the Alabama Department of Tourism has dubbed 2012 “The Year of Alabama Food,” Jefferson Community Club has dubbed the month of April “The Month of Barbecue.” It’s because for nearly 40 years now, Jefferson has hosted one of the best all-you-can-eat barbecues in the state.

On the third Saturday of April, members of the Jefferson Community Club come together to host the community-wide fundraiser, with pit-cooked chopped pork as the star of the event. Most members agree it’s the livelihood of the Club.

Club members know not to plan anything for the third Saturday in April because the day that has been set aside for the community tradition that has helped put the town on the map.

In fact, it’s best to keep clear the days leading up to the barbecue, as well. As with any large-scale event, preparations are made weeks, even months, ahead of time. Everybody has a job: some clean the custom-built concrete pit, while others unload slabs of firewood and advertise the event. Days are set aside for cleaning the clubhouse and the yard, and supplies are gathered.

So that nobody is overwhelmed, everybody contributes side items. Members and friends are asked to contribute five pounds of potato salad and at least two cakes.

Around Jefferson, Postmaster Patsy Rogers and her predecessor Lucretia Norris are famous for their caramel cakes, so they each bake several. And people love them.

Various jobs have been passed down through the years. Rogers and Norris remember when they used to help make the sauce.

“We’d spend all day in the kitchen making about five or six gallons of sauce,” said Rogers.

Norris remembers making sauce in her own kitchen while others were at the community house making sauce.

“It has come a long way now. The recipe has changed a little over the years, but it’s basically the same recipe we started with,” Norris said.

Douglas Peteet of Jefferson makes the sauce now, about 40 gallons of it, and he has been the chief sauce cook since the late 1970s. Rumor has it that when Peteet makes the sauce, he asks watchers to “turn around” while he puts in the secret ingredient. While nobody really knows what the secret ingredient is, according to Norris, “It makes it good.”

The food is not the only treat at the Jefferson Barbecue. While the barbecue is a day of hard work for club members, it’s also a chance to come together and enjoy the fellowship with friends and neighbors.

“It gives us togetherness. It shows how a little community like Jefferson can come together, and it brings us closer every year,” Norris said.

“It’s kind of like a homecoming at older churches. You see people there that you may not see again until the same time at the same place next year,” Club President Pam Baker said.

“It’s a real holiday. We all come together and work like a well-oiled machine to produce the best barbecue in Alabama.”

A well-oiled machine it is—the club is nearing its 40th annual barbecue, and nearly every one has been a raging success. Thanks to the support of countless return guests, the Club has been able to grow its facilities to match the high demand for its event dedicated to the southern delicacy.

For the 2,000 plus pounds of pork cooked each April, the club has since built a six by thirty foot pit with a shed over it behind the clubhouse and added rooms to the building to accommodate larger crowds. Such renovations were made possible by funds raised at annual barbecues.

“All of our proceeds go to community projects,” explained Norris. “We have given to our churches, our volunteer fire department, the cemetery, and, of course, maintained our clubhouse.”

The clubhouse served as a girl’s academy more than 150 years ago and in 1953 began serving as a meeting place for several community functions, the barbecue being its biggest.

The Club will begin serving guests at 11:30 a.m. and continue until 6:00 p.m. For only $8, guests who dine in will be treated to a buffet of all-you-can-eat barbecue, home-cooked potato salad, light bread, pickles, fresh skins and—of course—freshly baked cakes.

Take-out plates and individual pounds of barbecue will be available on the side lawn of the clubhouse. Plates cost $8 and include three quarters of a pound of barbecue, potato salad, light bread, pickles and cake.

It takes days of hard work for the members of the Jefferson community to host such an event, but the members agree that they enjoy they day.

“It’s a lot of hard work, but we enjoy working with each other,” Norris said.