Printing icon will be featured at Exhibit 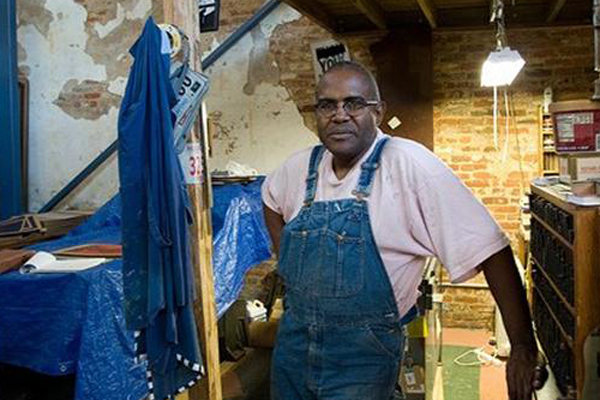 In 1989, Amos Kennedy took a family vacation to Colonial Williamsburg.

That trip changed his life.

Kennedy, then a computer programmer, was fascinated by printing methods used, which had long since been antiquated. Once back home in Chicago, Kennedy enrolled in a printing class and set up a small operation in his basement.

“It’s been downhill ever since,” he laughed.

Kennedy, a Louisiana native, eventually quit his job in computers and became a printer full time. He has since moved to Alabama and moved within Alabama several times.

“I move about every two or three years,” he said, noting stops in York, Akron and his current homestead in Gordo. “I’ve been in Gordo for three years, so I’m looking to move again.”

Kennedy’s next stop will be a temporary holdover in Demopolis as his works will be featured in The Exhibit by Bryan W. Whitfield Memorial Hospital. This quarter’s exhibit will open Thursday at 5:30 p.m. with a reception.

The bulk of Kennedy’s works are informal pieces of quotations, proverbs or sayings that have been pulled from conversations or passed through generations. He also prints commissioned posters for events.

Kennedy, who is considered by many a premiere typesetting folk artist, has found himself at the forefront of an emerging artistic medium.

“Today’s generation, all they know is computers,” he said. “They’ve never seen this kind of stuff before. That old saying, ‘What is old becomes new again’; that’s where we are with printing.”

Kennedy estimated that two to three print shops open nationally each year and as many as 50 public universities have integrated letterpress printing into their art curriculum.

At the forefront of an artistic movement and already considered one of the best in his field, one might suspect an artist whose works have been showcased across the United States would command top dollar. That depends on how you define top dollar.

“Unfortunately, my work sells for $15 a piece, and I say unfortunately because that is up from $10 a piece, which they were up until recently,” Kennedy said noting increases in the cost of ink and associated costs forced the increase. “I set the price at $15 because that’s what I can afford to pay. And most people who see a piece they like can afford $15. What good is it to create something if it’s so expensive that most people can’t afford to take it home and enjoy it?”