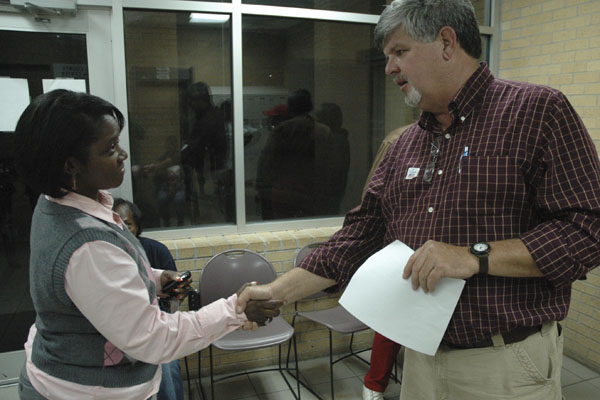 Three local elections brought out more than 7,500 voters as the offices of Circuit Clerk and Probate Judge were decided along with the Democratic candidate for the District 2 seat of the Marengo County Commission.

“It has been absolutely 100 percent fun,” Freeman, who will replace retiring circuit clerk Rusty Nichols, said of the election process. “Obviously, I’ve got a lot of folks to thank. First and foremost, I want to thank the good Lord.”

Just before the final returns arrived as the Marengo County Sheriff’s Department, Freeman greeted Sewell as she arrived at the facility. The two shook hands and exchanged pleasantries before Sewell gave Freeman a preview of 2018.

“I just want you to know one thing,” a smiling Sewell said cordially as the two shook hands. “In six years, I’m coming at you.”

“Katrina is great,” Freeman said of his opponent. “She ran a first class race. I didn’t know her before this, but she has been first class every time I’ve been around her.”

Sewell noted that the loss is little more than a setback for her as she fully intends to run again in 2018.

“The experience itself has been a great experience for me. My whole goal in this has been to be able to serve my community, to be able to be a role model for those that come behind me,” Sewell said. “I will be back in six years. I honestly believe the Circuit Clerk position is a position that fits my character. I do congratulate Kenny on his efforts and in his endeavors. I do know I’ve done all I could I’ve done everything in my power I could do. I just came up on the short end. But, for everything there is a season.”

Laurie Hall will replace the retiring Cindy Neilson after winning the Probate Judge race by a margin of more than 1,900 votes, outpacing Carla Gaines McIntosh 4,734 votes (62.9 percent) to 2,792 (37.10 percent).

“I think what helped me out the most was knocking on doors. I think that’s exactly what did it for me,” Petrey, who will go on to face Republican candidate Dan England in November’s general election, said. “It’s just getting out and meeting people and letting them know you are running. The fun thing about this is I got to meet a lot of people I didn’t know; a lot of people I might not have met and a lot of people I haven’t seen in a long time.”

Petrey said his strategy will change very little between now and November as he intends to take a slight break before hitting the campaign trail again.

“I want to take a break and hang out with my kids and my wife a little bit. Other than that, I’m not going to change a thing,” Petrey said. “I do want to thank all the people that have supported me through this. Without them, I wouldn’t have gotten this far. I am going to need continued support through the Fall.”

Only 25 Marengo County voters turned out for the lone Republican race of the evening, President of the Public Service Commission. Twinkle Andress Cavanaugh garnered 16 of those votes while Chip Brown pulled nine.

The general election is scheduled for Nov. 6.