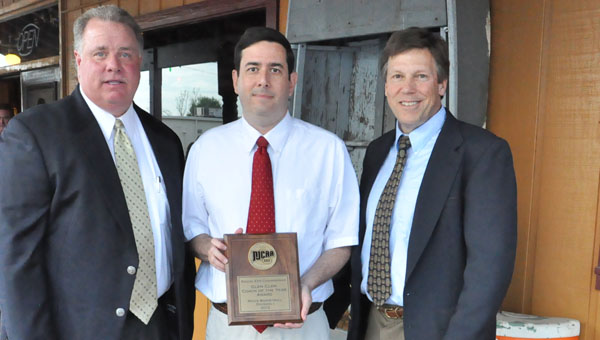 After leading the Jefferson Davis Community College Warhawk basketball teams to one of their most successful seasons in years, head coach Allen Gainer was named coach of the year for the Alabama Community College Conference last week. The award for Gainer was his second in a row as last year’s award was coach of the year for the South Division of the conference and this year was for the whole region.

Gainer led JDCC to the South Division conference championship this season and to the Final Four of the regional tournament before falling to eventual champion Wallace-Hanceville in the semifinals of the ACCC regional tournament in Tuscaloosa 74-60. The setback ended an amazing season for the Warhawks, who finished 19-10 and only one game shy of a berth in the title game.

“The Coach of the Year is, in my opinion, an award for the players,” Gainer said. “Without their hard work, dedication, and achievement it wouldn’t happen. We were fortunate to have outstanding leadership from our key players that resulted in us getting this honor two years in a row.”

Gainer, who is in his is 14th year as a head coach—all at JDCC—began his coaching career as an assistant at Shelton for five years, beginning in his senior year at Alabama and continuing as he worked on his Masters.

“I have loved basketball since I first started playing in sixth grade,” Gainer said. “I was fortunate to be a member of my junior college’s team and our coach exposed me to the technical side of basketball that I had never seen before. While I knew from an early age that I wanted to be around basketball my whole life, this solidified that I wanted to coach.”

Gainer said he has always believed that you have to be yourself as a coach.

“Kids know immediately if someone isn’t genuine with who they are,” he said. “As best I am able, I want my coaching to reflect who I am as a person, including my work ethic and spiritual beliefs. Our style of play has been greatly influenced by the late Bruce Stewart (from Northwest Florida CC) and by John Douglas (currently an assistant at Tuskegee University).”

“I chose math to follow in my mother’s footsteps as a teacher,” Gainer said. “I continued at Alabama to get a Master’s in Math Education. I was fortunate to have parents that loved me and supported me allowing me to chase my dream of being a college coach. Without their support (financially and emotionally) I would not have been able to continue down this path.”

The award for Gainer was one of many for JDCC’s basketball program this spring.

Turmonte Ragland and Brandon Scott were named to the All Southern League first team while LaRel Jackson, D.J. Jackson, and Sherman Presswood made the second team.

Ragland was also named to the All Region first team while Scott was named to the second team. Also, Jackson signed with AUM this spring.

On Thursday, Turmonte Ragland was named a third-team All American for JDCC.

This season the Warhawks had their best season since 1975-76.

But while he has seen recent success on the court, Gainer said he doesn’t believe the success of this season has changed him in any way.

“I realize how fleeting success can be, and that the success we had was more dependent upon the kids that executed our plan than it ever was on me,” he said. “The success has already translated into easier recruiting for us though. I have had two high school coaches that contacted us about their players because of the coach of the year award. Getting great players is what makes for a great team. You never hear about a donkey winning the Kentucky Derby.”