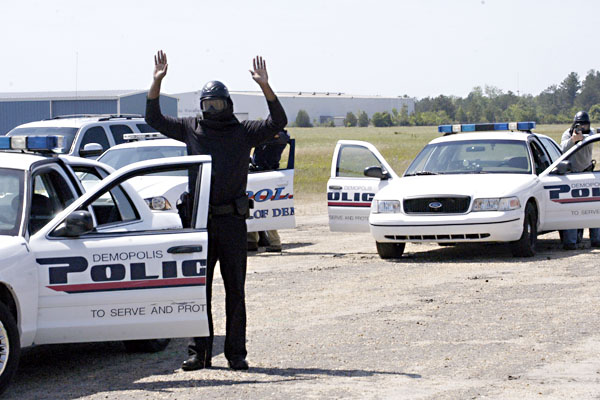 Fourteen Demopolis Police officers spent last week entrenched in a week-long training exercise that encompassed everything from self-defense to traffic stops and shooting.

“I want our officers to be the best, most trained and most qualified out there,” Police Chief Tommie Reese said, “but it’s also about their safety. They learn proactive driving and actually practice behind the wheel. They learn police officer’s self defense, there’s an agility test they are required to meet through (Alabama Peace Officers Standards and Training)…they learn how to properly and safely execute a felony vehicle stop with, in some cases, an active shooter.”

Much of the work also puts officers in the classroom as they brush up on ever-changing laws and regulations, including Alabama’s immigration statute.

Officers are also trained on how to safely handle domestic violence situations, the mentally ill and properly trained by the county department of human resources on how to handle instances of child abuse or child neglect.

“It’s an intense week,” Reese said of the information packed into five days. “Most of them have seen this stuff before but this makes them focus on it, to concentrate on it, and it brings them up to speed on any changes in the laws and practices.”

Reese said a similar course, which was held at various cites around the county, was planned for May for additional officers.