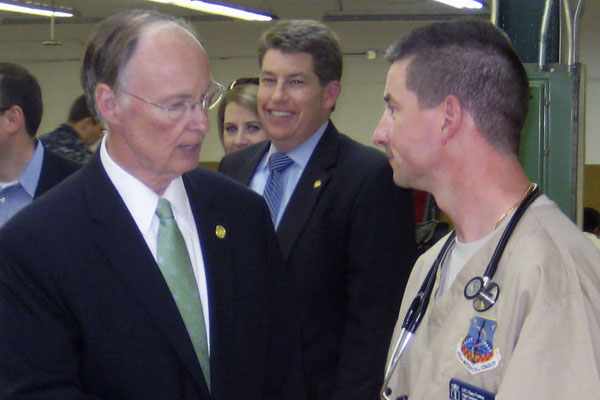 Four days into its mission, Operation: Alabama Black Belt 2012 had already seen well over 2,000 patients at its Demopolis location.

Commander Scott Olivolo reported that the medical mission had seen approximately 2,400 people at its New Era location with most seeking multiple services to result in 4,800 patient encounters.

“I think this has been an excellent opportunity not only for training our airmen, soldiers and sailors, but it is also a great opportunity for outreach,” First Lt. Nathan Beinert said of the exercise, which is designed to simultaneously provide medical services to economically strapped areas of Alabama while also helping Army National Guard and military reservists to prepare for high-level disaster situations such as Hurricane Katrina.

“From our perspective, to be able to come into an area and be able to serve an under-served population with vital services – especially optometry and dentistry – is absolutely huge for us,” Olivolo said before noting the mutually beneficial nature of the endeavor. “It also helps us to be prepared to provide these types of services in the wake of events such as Hurricane Katrina. This is really a perfect training ground for those types of scenarios.”

“I’ve been very impressed with the reservists and our National Guardsmen,” Alabama Gov. Robert Bentley said Friday while touring the Demopolis facility. “This is good for not only them because it keeps their skills fresh, but also it helps so many patients who would not otherwise be helped.”

Bentley, who spent time in the Selma, Demopolis and Hayneville locations of Operation: Alabama Black Belt 2012 Friday, also credited the Delta Regional Authority for its role in the initiative.

“It’s not just our military. It is our Delta Regional Authority that is part of this process also,” Bentley said of those who should be credited for the idea.

Bentley, a former physician, said he recognizes that the 10-day operation cannot meet all of the medical needs of a community, but that any such services at no cost are helpful.

“Any medical care like this helps the patients,” Bentley said. “It may help them find something that can be followed up with later with a physician. It’s short-term. It’s temporary. But it is better than none.”

The 70-plus military personnel and trained medical professionals who run the operation’s Demopolis facility will hold a diabetes workshop Wednesday, May 9 – its final full day of service.

The diabetes workshop will take place from 3 p.m. to 4 p.m. and will provide a diabetes overview while also focusing on diabetes managements, risk factors, exercise, goal setting, blood glucose monitoring, managing and preventing complications and the role of diet in controlling diabetes.