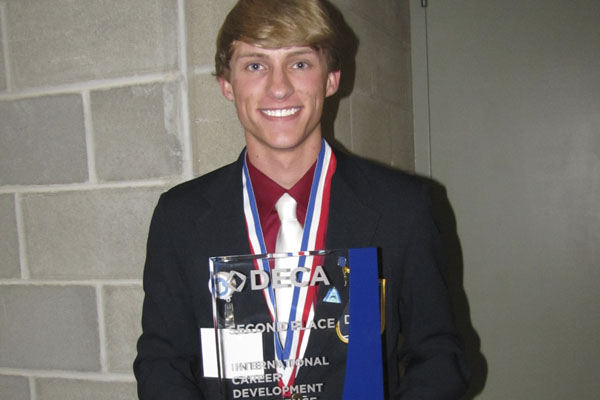 The organization’s highest level of competition, the international conference saw some 15,000 high school students from the United States, Canada, Mexico, Germany and other nations in attendance.

Gwin punctuated his high school DECA experience with his highest finish in four years with the organization, taking second place in the Professional Selling category.

“it may not be quite the same magnitude of feeling, but it comes pretty close standing on stage in front of 15,000 people,” Gwin said, likening the experience to the feeling of being part of Demopolis’ 2009 Class 5A state championship football team.

The category saw participants take a written test before having to do a sales pitch based off a given prompt.

“Basically what you do is take a 100-question marketing exam. Then you go in the next day and do a 15-minute marketing presentation,” Gwin said. “This year I had to sell a language-learning software to a pharmaceutical company looking to expand its business overseas.”

Gwin noted that the hypothetical scenario allowed for a certain level of creative freedom that helped him place in the competition. Rather than attempting to pitch an existing a real-life language learning software, Gwin – a self-professed Apple fan – pitched the company’s Siri software as if it were a language-learning program.

“When you’re doing that sales pitch, or that interview, you’re acting basically,” Gwin said of the role playing sequence.

The approach helped him to better his 2011 third place finish by one and allowed him to be the only competitor from the state of Alabama to place this year.

“In my personal category, there’s generally anywhere from 130 to 170 different competitors that qualify for the international level,” Gwin said.

But, as much as the personal win was gratifying for Gwin, he pointed to the overall experience of DECA as the real joy. He said that is why he has been so adamant about promoting the program to classmates.

“I’d say there’s between 50 to 60 different events. There’s something for everybody. That’s why I encourage so many people to get involved in DECA,” Gwin said. “I’ve been trying to talk a lot of other people from our school into participating.”

Demopolis’ chapter of DECA has grown considerably over the last four years as it has more than doubled the number of students who qualify for international competition over that duration.

“Having 19 (students) go from the school is a pretty big deal. Demopolis’ chapter of DECA is the biggest in the state,” Gwin said of the group, which has approximately 130 members. “My freshman year we had eight students get to go to Anaheim, Calif. We’ve grown not only as an organization overall, but also on a competitive level. For us to have 19 students be able to go to internationals is a pretty big deal.”

Gwin, who has also been to the international competitions in Louisville, Ky. and Orlando, Fla., said he hopes to help start a DECA chapter at the University of Alabama, where he will enroll in the fall. For now, Gwin is just enjoying what has to be considered a job well done by anyone’s estimation.

“As nice as the crystal trophy and all those medallions are, it’s the experience that won’t be forgotten,” he said. “That’s the greatest thing is the experience of gaining all that social and scholastic knowledge at the same time.”