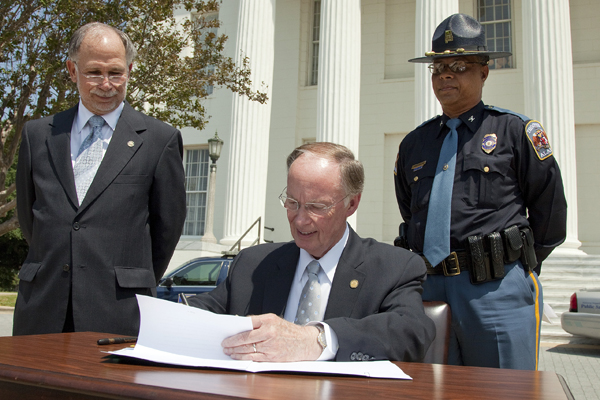 “Signing this bill sends a message that drivers need to focus on driving – not on sending a text,” Governor Bentley said. “There is nothing so urgent that it is worth risking your life, or the lives of others, by sending a text message while you are driving down the road.”

According to data provided by the National Highway Traffic Safety Administration, texting while driving creates a crash risk that is 23 times greater than when a driver is not distracted. Also, sending or receiving a text message takes a driver’s eyes from the road for an average of 4.6 seconds. For a driver going 55 miles-per-hour, that’s the equivalent of driving the entire length of a football field.

Alabama’s new law prohibits using a wireless device to write, send, or read a text message, instant message or e-mail while operating a motor vehicle. The fine for violating the law is $25 for a first-time offense, $50 for a second offense and $75 for a third or subsequent offense. Also, for each offense, a two-point violation would be placed on the offender’s driving record.

Representative Jim McClendon was the House sponsor of the legislation.

“After six years of attempting to get this bill through, persistence has finally paid off,” Representative McClendon said. “It took four years for this bill to pass the House, two years for it to pass the Senate, and today, I’m delighted that Governor Bentley is signing this bill into law. Our highways will be safer with the passage of this law.”

Senator Jabo Waggoner was the Senate sponsor of the legislation.

“I am proud to have assisted in passing this important bill that I believe will help save lives on Alabama’s roadways,” Senator Waggoner said. “Signing this bill sends a message to drivers that texting while operating a vehicle is harmful and, thanks to the Legislature and Governor Bentley, finally prohibited in Alabama.”