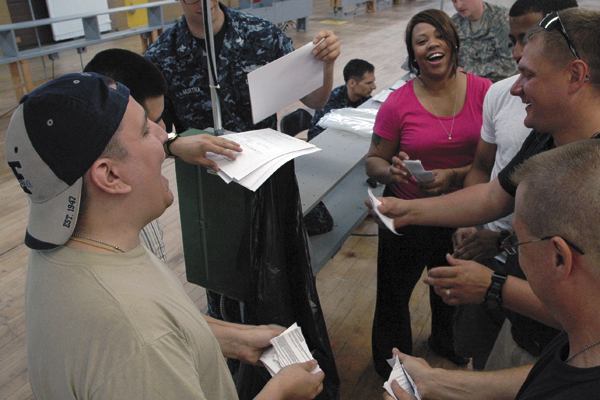 Operation Alabama Black Belt 2012 closed its doors Thursday after 10 days that were considered a success on multiple levels.

Commander Scott Olivolo, head of the Demopolis portion of the operation, reported 4,036 patients that sought medical treatment between May 1 and May 10 at the building that formerly housed the New Era Cap Company.

“As far as street value, we’re talking about $800,000 in medical productivity,” Olivolo said.

The health care services, provided at no cost to the community members who took advantage, were part of an initiative that saw military personnel with medical training spend 10 days in the city. During that time, Operation Alabama Black Belt 2012 worked on two fronts, first providing medical services to under-served, financially-strapped areas and secondly creating emergency preparedness opportunities for military personnel.

“Twelve hour days for folks straight through,” Olivolo said, referencing the task that faced the majority of the 77 service men and women who camped out at the New Era building. “As far as productivity, couldn’t ask anymore from these fine folks.”

But, inasmuch as the visiting military personnel were key to the operation’s success, the neighboring business and medical community play substantial roles in the initiative.

“We couldn’t ask anymore from the community. We typed up 15 certificates of appreciation for local merchants,” Olivolo said, crediting an array of local businesses and entities with providing everything from tables and chairs to cups, dental equipment and tents. “We couldn’t ask anymore from this community and, hopefully, we’ll be able to come back and serve them real soon.”