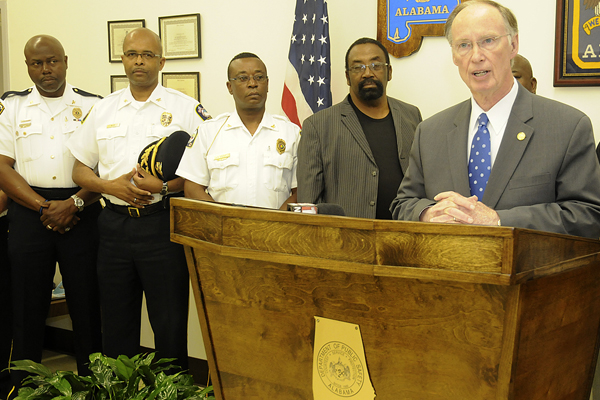 SELMA – Of the nine people killed in automobile accidents this year in the region covered by the Alabama State Troopers post in Selma, none of them were restrained by their seatbelt, Gov. Robert Bentley said Tuesday.

State and local law enforcement officials, covering areas such as Marengo, Hale, Dallas, Perry and Wilcox counties, as well as areas from Pine Hill to Prattville, joined Bentley in Selma to announce the start of the statewide “Click It or Ticket” campaign. A campaign whose goal it is to educate the public on the importance of wearing a seatbelt and using child restraints.

Bentley said seatbelts undoubtedly save lives and give people the greatest chance to get out of an accident without being killed.

Trooper John Reese said about 31 percent of vehicular fatalities that occur in West Alabama involved occupants not wearing their seatbelts. With that in mind, Reese said, campaigns emphasizing safety on state highways, such as “Click It or Ticket,” are important.

Selma Chief of Police William T. Riley said his department recognizes the importance of driver safety and knows it is necessary to change the driving habits of those living throughout the area so they and those around them are safer.

“We feel very strongly that [this initiative] will allow individuals to understand what we’re trying to do is not issue tickets for any type of revenue situation, but we’re issuing tickets to say, ‘Lets protect yourself,’ and, ‘Lets protect your family,’” Riley said.

In 2011, Alabama State Troopers worked 547 fatalities, of which 441 involved vehicles with seatbelts, Reese said. Roughly 62 percent of people involved in those accidents chose not to wear their seatbelts, he said.

Demopolis Chief of Police Tommie Reese said it was important for Alabamians to encourage those around them, especially their children and friends, to wear seatbelts any time they go out, regardless of the distance to their destination.

“We’re out here to save lives,” Reese said. “It’s important that everybody goes home at the end of the day.”

Like Riley and Reese, Camden Chief of Police Lucas Knight said the initiative was important to ensure all those driving on Alabama roadways remain safe in the event of an accident.

“It’s very important for us that the public buckles up,” Knight said. “This is something that we’ve been enforcing for many years. We’re out to enforce this so people buckle up and be safe.”

Wilcox County Sheriff Earnest Evans called the “Click It or Ticket” campaign one of the greatest programs Alabama has.

“Seatbelts save lives,” he said. “We’ve had fatalities on the major highways that come through, and this here is a great way to deter it.”

“I want lives to be saved,” Bentley said. “All we’re doing is asking to put their seatbelts on. You ought to care, not just about your life, but your family’s.”

The annual campaign began last week and will continue through the annual Memorial Day holiday weekend and end the weekend of June 3.