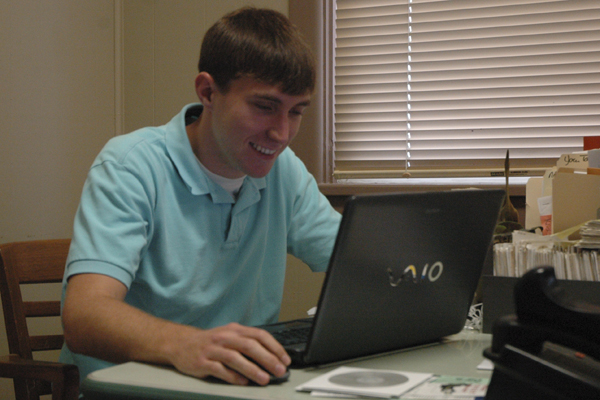 Blake Evans will be a junior at Auburn University in the fall. For the summer, however, he will be Linden’s newest asset thanks to a program called Living Democracy.

Evans, a communications major with a minor in community and civic engagement, is one of seven fellows throughout the state who will earn college credit while being immersed in the day-to-day activities of a partner city.

“I have a professor that I’ve had several semesters. He was one of the two that started the program. He told me about it.” Evans, a Deatsville native, said of how he became involved in the initiative.

As part of the program, Linden provides Evans a place to live during his 10-week stay. Evans, in turn, will focus on developing and seeing through a specific project to benefit the city.

“One of the things that sounded so good about it is that it didn’t tie you down to a certain project,” Evans said. “You get to work with your community partner to develop something that is unique. It’s not something where you’re given a set of directions and left to figure it out.”

” This summer’s Living Democracy off campus class credit experience is the first of its particular kind for Auburn students, and it is sponsored by the AU College of Liberal Arts,” Linden Mayor Mitzi Gates said. “As a partner city, Linden has two primary responsibilities: providing Evans with a place to live and collaborating with him on a mutually beneficial project. Interestingly (and likely a total surprise to most Lindenites), Linden already had the perfect place to house a college student whose mission is to immerse himself in the heart and spirit of the town. Evans’ residence until the end of July is a second story efficiency apartment located in the fire station. And the mutually beneficial project presented itself just as readily as the living space did.”

For his project, Evans will be developing a DVD to promote Linden and recruit potential businesses to the city.

“We have decided to take on a DVD project,” Evans said. “We’re going to make a DVD that promotes Linden to potential businesses and industry and really points out why they should want to locate here.”

“While in Linden, Evans will work with the Linden City Council, the Linden Industrial Development Board, Marengo Economic Development Authority, and Linden’s Youth Advisory Board to make a promotional DVD for Linden, a perfect project for a communications major and community and civic engagement minor as well as a welcome economic and community development boost for the City,” Gates said. “The City was awarded a service grant through the University of West Alabama’s Division of Community Outreach, giving his Living Democracy experience yet another dimension of collaboration, an unexpected opportunity which he welcomes.”

Evans has already met with UWA Director of the Division of Outreach Services Ken Walker and a Montgomery-based production company that will direct, shoot and produce the Linden DVD. His next step will be to put together the script.

“Hopefully, if we’re not to the final draft yet, we’ll have a very, very good draft (the Linden City Council,” Evans said of his June 5 target date for the script. “I hope to be able to do the best I can for the entire 10 weeks I’m here. The end result will show the hard work of a lot of people.”