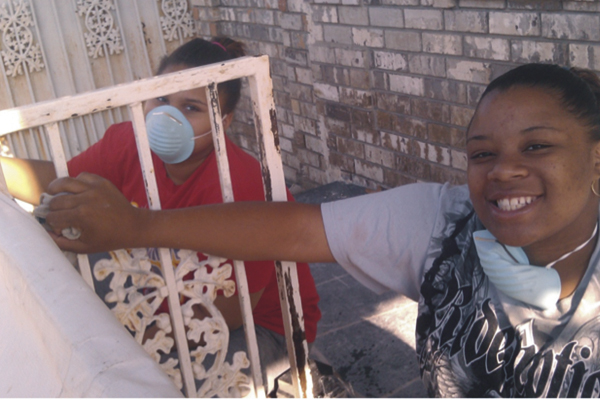 While most high school students were at the beach or enjoying some other spring break activity, a group of students from Marengo High School were spending time in service to others.

The latest service project saw the students in New Orleans, working with those who are still suffering and struggling to rebuild in the wake of Hurricane Katrina.

“We wanted to reward some of the students who have been most heavily involved and expose some of our students to needs outside our state so that is where the New Orleans Spring Service Project began,” Marengo High teacher Caleb Churchill said.” I learned about an organization called Youth Rebuild New Orleans. It was started by high school students who were turned away by service organizations in NOLA after Hurricane Katrina because they were considered ‘too young’ and ‘unreliable’ to help in Katrina relief efforts. For the past five years they have worked in Katrina relief and now rebuilding efforts to improve the city of New Orleans.”

The trip served as the latest effort in a leadership program at Marengo, an initiative that saw students in grades 7-12 participate in various projects around the region.

“Last January (2011), in honor of Dr. Martin Luther King Jr.’s birthday and in hopes of getting our students more involved in community service, we began a Service as Leadership Program at Marengo High School,” Churchill said. “It started as part of our 7th-12th social studies classroom’s big goal of ‘Becoming Global Leaders,’ seeking to teach our students what it means to be good citizens. But quickly this project spread to others across the school and even beyond. We have had students from other schools participate and leading community members as well. We used King’s birthday as a launching pad to start community service projects beginning in Dixons Mills and then spreading to the surrounding areas. After the April tornadoes hit, our students rallied to aid locals who lost everything in the tornadoes. We focused first on the Bellington Circle community of Myrtlewood who had been largely overlooked by FEMA, the Red Cross, and other relief agencies. We had more than 50 students participate in numerous days of service (including taking a busload of students one day last spring to do service during a school day. As time passed, we have sought to expand our service projects to places outside of Marengo County to expose our students to the needs of people outside our community and our area. Early this year, we took another busload of students to Tuscaloosa to volunteer helping with the ongoing tornado disaster relief and clean up efforts.”

“We worked with YRNO (Youth Rebuild New Orleans) for a full day on Friday and a half day on Saturday, rebuilding two houses that will be resold to teachers at 80 percent of market value. On Saturday our students worked with other high school and college students in NOLA rebuilding a house in New Orleans,” Churchill said.

While the trip was rooted in service, the students also were able to see some of the sites around The Big Easy and enjoy their getaway.

“On the trip, students also got to enjoy a visit to the French Quarter Festival, the National World War II Museum, riding NOLA street cars, and experience unique NOLA food, music, and culture,” Churchill said. “It was an amazing experience for us, especially since most of our students had never been to New Orleans. And we did not realize how much the people of New Orleans were hurt (and especially are still hurting) by the effects of Hurricane Katrina.”

“Dr. King once said, “Life’s most persistent question is: What are you doing for others?” We are trying to teach our students that best way to live a fulfilling life is to give to others, especially those who can do nothing to repay what you have done. It is really exciting to see students who have plenty of needs of their own, focus on serving others first rather than themselves,” Churchill furthered. “They certainly deserve to be recognized for the great things they are doing. Jesus gave a new definition of greatness in the Bible. He said, anyone who wishes to be great must become a servant of all. By that definition anyone can really be great, because all of us can serve in some way. These students have taken these words to heart. They are truly becoming great, not necessarily through power or fame or great riches, but through service. In a world and a nation marred by many who seek their own interests even sometimes at the expense of others, these students are becoming leaders the right way, by learning to serve and put the needs of others first. For that, they deserve all the praise and recognition we can give them.”