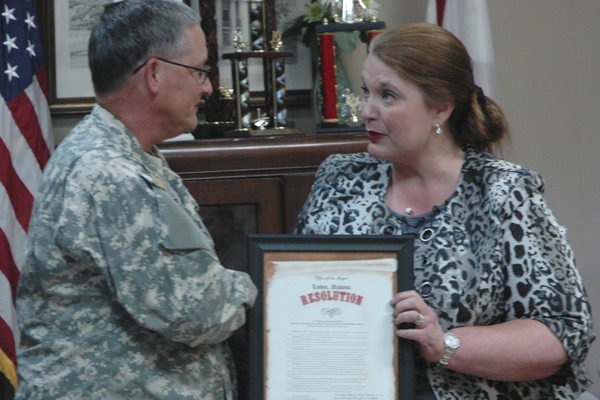 LINDEN – The City of Linden bid a tearful goodbye to its local National Guard unit during Tuesday’s council meeting.

After Lt. Colonel Randall Brown led the council and those in attendance in the Pledge of Allegiance, Linden Mayor Mitzi Gates choked back tears as she read a proclamation that would moments later be presented to Brown and the rest of the 440th Transportation Theater Opening Element.

“This is just a little bit and the smallest thing we could do to thank you for all you have done for our town,” Gates said as she readied to wish the group well. “We trust the leadership of our governor, we are just saddened that our armory is closing.”

Fort Hill-McManus-Boggs opened its doors in 1987. However, the citizen-soldier National Guard tradition in Linden goes back to 1959 when a unit first located in the county seat of Marengo.

Since that time, guardsmen based out of Linden’s armory have served international missions in Southwest Asia, Saudi Arabia, Kuwait and Iraq.

As of June 10, the 440th will see its base of operations moved to Selma. But, according to Brown, the company’s home will always be in Linden.

“It is on a sad occasion we are leaving the City of Linden,” Brown said before calling Linden the embodiment of all for which the National Guard has stood since its inception. “I appreciate the City of Linden. No matter where we’re at, Linden will always be our home. As we move forward, the Linden leaf will continue to be part of our crest.”

As Brown concluded his address to the city council, each of the other 15 members of the 440th present at the meeting stood to introduce themselves to the city’s governing body and express their gratitude and appreciation for their time in the city. Two of those members were graduates of Linden High School.