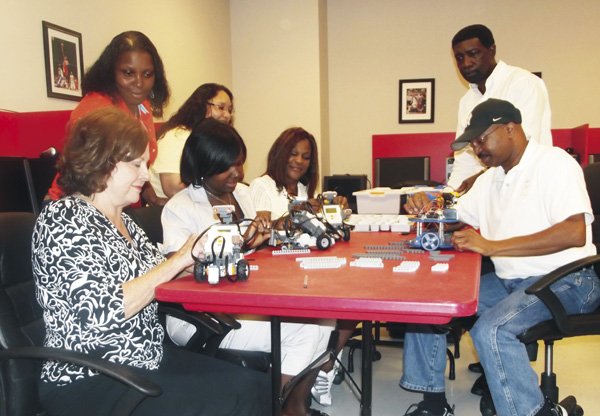 Some of the students participating in summer programs at the Theo Ratliff Activity Center (TRAC) will get a rare opportunity this year.

Thanks to the generosity of Auburn University and the Alabama Cooperative Extension System, TRAC will offer a robotics program this summer.

ACES provided the center with four Lego Mindstorm NXT Robotics kits to utilize during the summer months, kits TRAC and its technology expert Jonathan Jones will use to put together three teams of robotics students.

The teams will be headed up by Jones, Demopolis High School science teacher Barbara Wallace and Sandra Ward, a Marietta, Ga. resident who owns Alpha Academy Tutoria, an education company focused on providing tutoring to children in disadvantaged communities throughout Georgia and large portions of Alabama.

“Tuesday, we started the programming aspects of (the training),” Jones, who helped Wallace and Ward master the kits, said. “I am teaching them basic computer programming to pass that knowledge onto the students.”

Jones had long wanted to employ some form of robotics education at the center but found himself frustrated in those efforts until he recently received a phone call from Susan Thompson at the Alabama Cooperative Extension System. Thompson offered TRAC the kits for the summer.

The center will take 12-15 students to form three competing teams. Students interested in taking part in the program are encouraged to contact Ed Ward at the Theo Ratliff Activity Center no later than 5 p.m. Monday as space is limited. The program is expected to last six weeks.