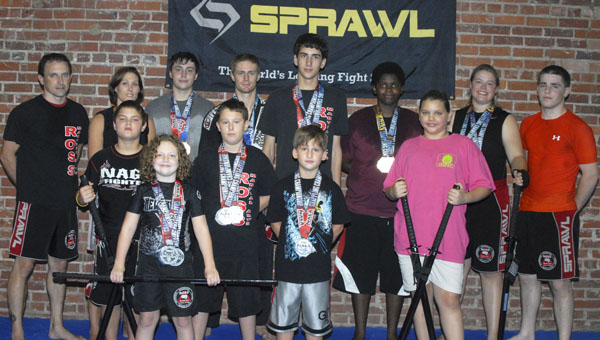 Many competitions hand out gold, silver and bronze medals to winners, but few award swords to their champions.

The North American Grappling Association (NAGA) does give samurai swords to its children and teen winners, and fighters from Ross Martial Arts in Demopolis earned their share of metal this past weekend.

A team of 13 fighters from Ross competed in Saturday’s NAGA Grappling Championship at Mundy’s Mill High School outside Atlanta, taking home about 25 medals and some blades to boot.

Hundreds of competitors from across the country participated in Saturday’s NAGA event.

These stand in comparison to fighting system like boxing, kickboxing, taekwondo and karate that allow striking.

In fact, NAGA rule are based on those used by the International Brazilian Jiu-Jitsu Federation, though there are some differences.

Fighters win by getting their opponent to tap out or getting the most points based on a scoring system that awards takedowns and different holds.

There are two different branches of competition: gi and no gi.

In gi wrestling, a traditional kimono uniform is worn, while in no gi matches, fighters wear shorts and athletic shirts.

Fighters are also divided up by gender, age, weight and experience. Wrestlers start as young as six and go up to 50 and above. 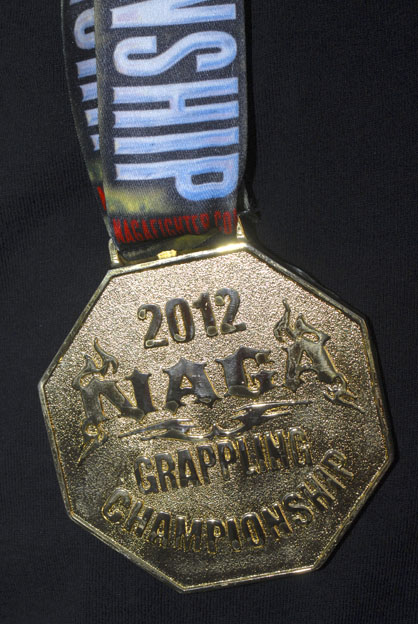 Last Saturday’s competition marked the sixth time fighters from Ross have competed at a NAGA event.

He and student Daniel Alexander competed in a February 2011 event in sort of a scouting mission.

“We loved it. We had a great experience,” Jay Russell said.

Ross took the academy’s first full team to a July 2011 event and have competed in four other competitions in Atlanta and Nashville since.

In the most recent championship, these fighters won the following medals in their classifications: