Demopolis and Sweet Water face off 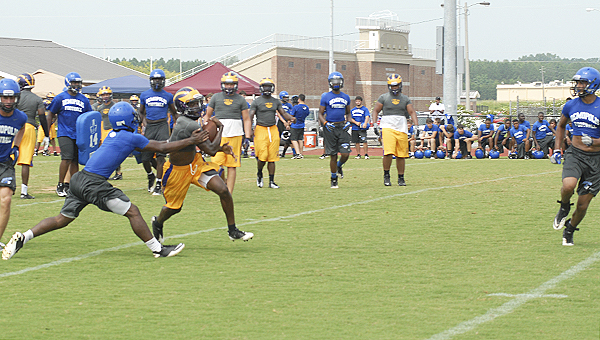 Practice for the upcoming season does not start until Aug. 6, so this gave both teams an opportunity to get some conditioning in, and also help the players learn where to line up.

Demopolis head coach Tom Causey said that having the 11-on-11 gives the players and coaches a realistic idea of where they are heading into practice next week.

“Having 11 guys going up against each other like that today is a lot more realistic than the 7-on-7’s,” Causey said. “It’s good to go up against another team and get a feel for where we are.”

Sweet Water head coach Stacey Luker said a scrimmage like this is a great teaching tool for the coaches.

“It gives the coaches a chance to evaluate the players,” Luker said. “We can use it to teach the players on technique going into practice next week.”

Both coaches felt that depth would be a main point of focus going into practice.

“We have to focus on getting better at all positions and finding some depth,” Causey said.

“We feel pretty good about our skill positions,” Luker said, “but we have to get some depth on our lines on both sides of the ball.”

Coach Causey felt like his players gave good effort during the scrimmage Monday.

“Our guys ran around with a lot of effort today,” Causey said, “but there is still a lot for us to build on, which is good for us going into practice next week.”

Coach Luker said that having a good working relationship with Demopolis is great for the team and the program because of scrimmages like these.

“There really is no first day of practice anymore,” Luker said. “We are able to do so much over the summer now, and being able to work with a bigger program like Demopolis is really good for us.”

Coach Causey said that he is excited for practice to officially get started next week.

“I am really looking forward to next week,” he said. “Football doesn╒t really start until the state says it does on August 6.”

Coach Luker is excited that it is getting closer to the first game.

“The official start of practice just means that we are getting closer to our first game,” Luker said.