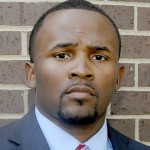 “Mr. Jackson hired me in Demopolis,” Flowers said, “and he called me about a month ago with a possible head coach opening at Southside. I couldn’t turn it down.”

After his playing career, he served as an assistant at Alabama State University, Northview, Demopolis High School, and served as head football and baseball coach at Demopolis Middle School.

Flowers said he is thankful for the opportunity to take charge of the program and for the trust that the school board has in him.