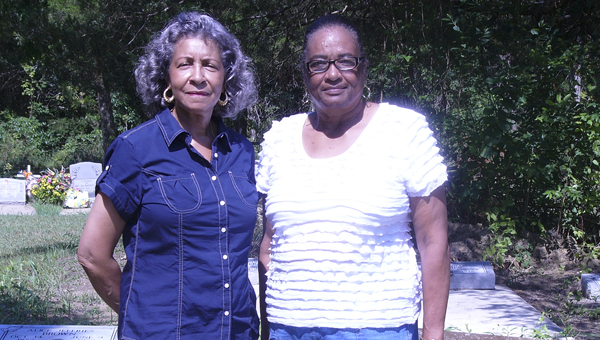 From left Fannie Russell Littleton and Mary Jones-Fitts stand in front of the newly placed vault tops and headstones at the Allenville Benevolent Society cemetery on Allenville Road.

When Fannie Russell-Littleton attended her first genealogy class at the Marengo County History and Archives Museum, instructor Mary Jones-Fitts greeted her like she does all her students, with a “hello” and a smile.

Today the two women are a lot closer after discovering they are cousins through a common slave ancestor.

“We couldn’t do anything but hug each other when we found out. It definitely alerted me when she said she was researching my town,” Fitts said about Faunsdale, Ala.

Knowing this connection, Fitts and Littleton then worked on genealogy projects and research. This included new vault tops and markers for the Jeffries and Brown families buried in the Allenville Benevolent Society cemetery dedicated in mid-July.

Littleton said, in 2005, they held a dedication ceremony for the Freetown historic marker placed in front of the Bethlehem Missionary Baptist Church and attention was brought to the families that work needed to be done in the cemetery.

She said they relied mainly on personal knowledge, obituaries and church records to identity some of the graves.

“The children and grandchildren of the families paid for the vault tops and the markers,” Littleton said. “There were six vault tops placed and seven headstone markers.”

Littleton’s mother, who is 96 years old, is the sole surviving child born to Thomas and Nannie Jeffries, both of whose headstones were placed during the dedication ceremony. The ceremony included a selection, a reading and a blessing of the headstones.

Allenville Benevolent Society Cemetery is where inhabitants of historic, Freetown, were laid to rest.

“Some of the people may not have been able to afford proper headstones,” Fitts said. “There are even burials out at the cemetery where you can feel the depression in the ground, but those graves have no identification.”

According to the information listed on the historical marker, a group of African American women and men laid the foundation for the Freetown community in 1867.

Fitts and Littleton plan to continue to search for more information in efforts to label more graves in the Benevolent cemetery in the near future.

“Moving forward, I am developing a book for the cemetery that will include the names of the people buried here and a map of their plots,” Fitts said.