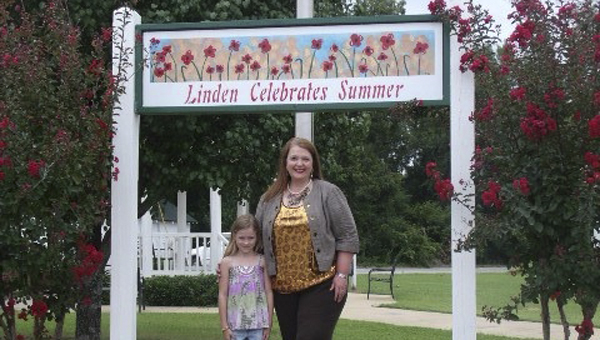 Mayor Mitzi Gates thanks Keaton Grace Gunter for the original painting they are standing beneath, which has become the newest addition to Linden’s Gazebo Park.

Keaton Grace Gunter, daughter of Dan and Joy Lee Gunter of Linden, is a young local artist whose work will soon be known statewide.

Her whimsical painting of a dancing plate won local honors in the Marengo Academy spring art competition, and it was also chosen in the statewide Farmers Federation art contest as one of the 12 paintings that will be featured in the Alfa Farmers Federation 2013 calendar.

The creative 7-year-old Gunter, who was a first grader when she painted the winning work, says she does not yet know which month her dancing plate will represent in the calendar.

At the beginning of the summer, she attended Vacation Bible School at Thomaston Baptist Church, where her music teacher was Mayor Mitzi Gates.

When Gates learned about Gunter’s artistic accomplishment, she asked the young Linden artist if she would consider painting a sign insert to enhance the downtown Gazebo Park. She accepted the challenge and created a floral theme to represent the sign’s message: Linden celebrates summer.

The sign is her largest work to date, and she is looking forward to designing and painting other seasonal signs to be displayed at the gazebo throughout the year.

“The best thing about painting a sign for the gazebo is that I get to let everyone see my artwork when they come through town,” Gunter said.

Gunter also said that she thought a lot of students in Linden who enjoy painting and drawing would probably like to paint big pictures to put downtown for everybody to enjoy as well.

Gates said that Gunter’s enthusiasm for sharing her own artwork, and her realization that many other talented student artists in Linden would have that same enthusiasm, has actually sparked an idea for a Linden Youth Advisor project. Gates said that she looks forward to working with the Youth Advisors on this project when school starts.

Keaton Grace, her mother says, has been drawing since she was able to grasp a crayon. She spends a great deal of time painting and drawing for pleasure. Gunter has a twin brother, Addison, who, like his grandfather, father and twin sister, is also very artistically talented. Addison placed in the school art contest with a best-in-show painting.

The 7-year-old Gunter twins are looking forward to becoming second graders this month, and they both have plans to continue entering art contests and just painting and drawing for fun as often as possible.