Brady to leave Chamber this month 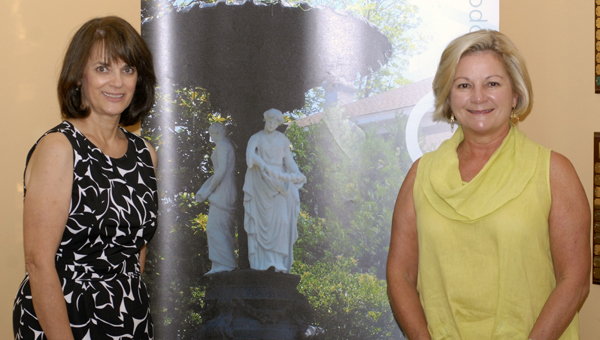 Pat Brady (left), who will retire as office manager for the Chamber on Aug.17, stands next to Laurie Young who will assume her position. (TIMES PHOTO-JUSTIN AVERETTE)

Tears nearly filled the eyes of Pat Brady, office manager of the Demopolis Chamber of Commerce, as she reflected on her eight years at the Chamber. Brady prepares to retire on Aug. 17 with her husband to South Carolina.

“It has been a very emotional time preparing to leave,” Brady said. “I will miss the people I have met, the things I have done and things I been exposed to. It has really been a great job.”

She said she is excited to move closer to their family in South Carolina.

“We have already labeled Mondays as the day we will keep our two grandsons who are ages 3 and 5,” Brady said.

Jennifer Tate, executive director of the Chamber, said she is sad Brady will be leaving, but is happy for her, as she will be moving closer to family.

“Words cannot express what a profound and positive impact Pat has had in this managerial position over the past eight years,” Tate said. “She has touched the of lives of many while residing and working here and she became a huge part of my life as well.”

Before Brady’s last day on Aug. 17, she began training the new office manager Laurie Young at the beginning of August.

The ladies gathered around the computer as Brady began to prepare Young for her role as office manager which includes working on the city’s major events such as Freedom on the River and the city’s famous event, Christmas on the River.

Young, a native of Linden, said she was informed about the position from her daughter who serves on the Chamber’s Board and decided to apply.

After leaving her most recent job working at The Mustard Seed, located downtown, she will fully begin her position on August 20. She comes to the Chamber with a teaching and office manager background.

“I look forward to meeting the people here and embarking on this new adventure,” Young said.

The Chamber will host a going away gathering for Brady and her husband on Aug. 9 from 5:30 p.m. to 7:30 p.m. held at the Chamber downtown.