Rush to retire from First Baptist 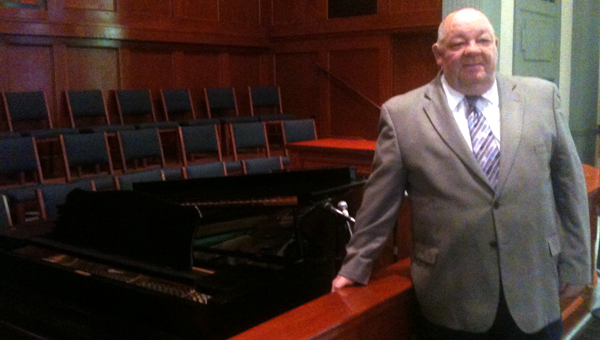 Ed Rush, current minister of music and senior adults at First Baptist Church of Demopolis will retire at the end of the month. Rush directs the choirs for the church and plans activities for the seniors. He is picture at the piano at the First Baptist Church in the sanctuary. Rush will serve as the interim until his replacement is found.

While the end of August will mark Ed Rush’s retirement after 15 years as minister of music and senior adults of First Baptist Church of Demopolis (FBC), he won’t conclude his services just yet.

Rush plans to ensure the church choirs will still have music direction until his replacement is found. He also will continue his work with the senior citizen group to plan activities.

“He will retire at the end of August, but he will still be with us,” First Baptist Pastor Carl Williams said. “That definitely says a lot about his dedication.”

Rush plans to celebrate his 70th birthday in December and thought this would be a good time to allow someone else to take over his minister of music position at the church.

“I will continue to live here in Demopolis with my wife Bobbie, and I will sing in the choir,” he said.

For Rush, his love of music goes back to his high school band days as a trombone player. Later, he began his music ministry at his first church in January 1962.

“I have had great memories here during my time in this role,” he said after starting at the Demopolis church in 1996.

Rush described his joy having been able to direct 85 voices and five different choirs from the area a couple of years ago during a church event.

“There was also a time when UA students in the orchestra came down during Christmas time to accompany the choir, and it was beautiful,” Rush said.

Williams, who met Rush when he began as pastor last May, said it was clear upon arrival that Rush was loved and respected in the church.

“After being here for such a long time, Ed has cemented a great legacy here at this church,” Williams said.

He said it will be a challenge to find another music director, but they have a great search committee.

“You can’t replace Ed,” he said. “Those who come after him will have to build on the great legacy he has created here.”

Rush is looking forward to assisting with the church’s composer weekend event held on Aug. 19 at 6 p.m. led by guest composer Robert Sterling of Nashville.

Rush is the father of Sherri Campbell and Stephen Rush and has three grandchildren Abby, Maddie and Dawson.