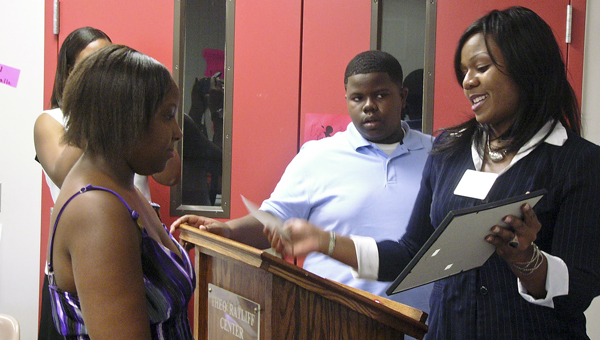 “I am speechless,” Jones said. “Today is my birthday and this is such a great present.”

McDowell and her mother, attended the reception not knowing Kenya was going to receive a scholarship.

The scholarships were awarded by the Shatania Edmonds (Issac) Scholarship Foundation, which celebrated its 10th year of giving merit- and need-based scholarships to deserving students.

Tears nearly filled foundation founder’s Shatania Issac’s eyes, as she called McDowell up to announce the $1,500 scholarship. McDowell plans to enter Concordia in the fall pursuing a social work degree.

“It overwhelmingly does my heart more good than anything to give back in this way,” Issac said. “I am so pleased to be able to contribute to their success.”

“It’s great that I can aid students in this way and many of them look forward to the scholarship in the community,” Edmonds said. “The students have such a great enthusiasm.”

Edmonds grew up in a low income-family and had good grades, but she also had three other siblings that she knew her parents would have to assist with college as well.

“I received some scholarship assistance, but one thing that really made me want to give back to the community was when I received a large community donation from a community member,” she said.

During pharmacy school, Edmonds worked three jobs and it often took away from her time to study, but she said she remained dedicated to academics.

“I worked those jobs to make up for some of the expenses the scholarship didn’t cover and that also made me want to make it easier on the next person and start the foundation,” she said.

Edmonds grew up in Demopolis and then went to further her education at Xavier University in New Orleans, La.

Edmonds said she wanted the program to talk about a variety of subjects.

Moving forward, the Foundation will branch into mentoring students in the area in addition to annually distributing scholarships. In the future, Issac hopes to have another scholarship for single mothers wanting to return to school.