Victoria Washburn, 17, of Demopolis was crowned the 2012 Miss Teen Alabama earlier this month.

During this year’s pageant in Madison, Ala., 37 girls competed in various age divisions. Washburn was in the 16-19 age group and competed against seven other girls for the title.

“I learned about the competition from the director and then decided to participate,” she said. “I enjoyed meeting new people and doing it just for fun.” 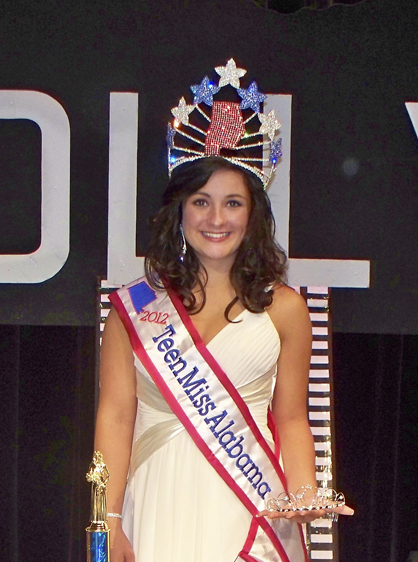 After advancing from the local pageant in Livingston, called “Princess of Hope,” Washburn represented this area in the state competition.

At the state level, she won the sportswear portion as well as the overall title. The crown she won is carved to look like the state of Alabama.

“The crown is pretty heavy,” she said. “It is definitely unique.”

She also plans to continue to participate in pageants in the future. She started competing at age 6 with Christmas on the River.

“I’m not stopping now by any means,” she said.