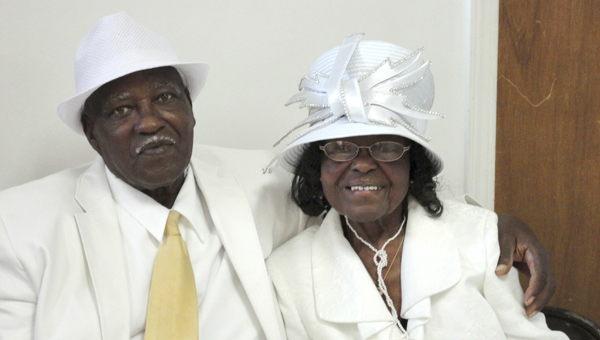 Sixty years ago, a nervous young man of about 19 named Preston McCloud arrived at the home of his hopefully soon-to-be wife to ask her mother’s permission before proposing.

“I was definitely nervous when I talked to her mother,” he said. “After letting her know I loved her daughter, she said she would give her to me.”

In June of this year, Preston and Valada McCloud, both 79, celebrated their 60th wedding anniversary among family and friends.

Dressed in all white for their 60th anniversary celebration, the McClouds enjoyed time with friends and family at the Majos Activity Center in Linden.

“People brought gifts, the food was so nice and the mayor spoke,” Mrs. McCloud said. “I most enjoyed hearing all the beautiful words from my family and friends.”

Vvaunka McCloud, their youngest daughter, worked together with their family to coordinate the 60th year celebration, which was themed “Diamond Wishes for an Undying Love.”

“We worked together as a family unit to host this occasion for my parents,” she said.

Married at 19 years old, Preston and Valada met when they were students at Linden Academy and after meeting in her mother’s cafeteria they began to date for a year before marrying.

Giving the credit of the longevity of their marriage to God, Valada McCloud keeps her marriage license tucked away in her bible, which reads their marriage date of June 21, 1952.

“We got married in Mississippi when we were very young,” she said.

Given the ever rising divorce rate, Valada McCloud advises couples to consult with the Lord before marrying.

“Consult the Lord and then be sure you and the other person want the same things in life,” she said. The two also agreed that young people today should remember to talk to the parents of your mate as you are considering marriage.

“There is just so much going on nowadays, my advice is to go together for a while, don’t rush it and be sure to understand each other,” he said.

The two both hail from Marengo County and have been in Linden about 40 years of their marriage. The McClouds, who affectionately refer to each other as “Mama” and “Daddy,” raised seven children throughout their marriage.

Their daughter, Vvaunka who currently lives in Montgomery, said she remembers the story about why they refer to each other by those nicknames.

“They would say when we were kids and we heard my mom and dad talking to each other and using their first names, we would try to do that as well. They didn’t want us to call them by their first names out of respect, so they just started calling each other ‘mama’ and ‘daddy,’” she said.

They are the parents of seven children Dianne-61; Cedric Preston-58; Remegi-53; Valada II-51; Darold-49; Vvaunka- 43 and Gail McCloud who passed away at 36. They have 12 grandchildren and six great-grandchildren with two more on the way.

On a regular day, Preston and Valada McCloud can be found enjoying each other’s company in their rockers on the front porch. They also remain active around the house and in church. Their daughter, Vvaunka said sitting on the porch is one of their favorite pastimes.

“They love sitting on the porch and having good conversations while enjoying the outdoors,” she said.

Vvaunka, who is unmarried, said it is truly amazing how they have endured their life together. She said if she ever got married she would want her marriage to be like her parents.

“I am truly excited in this day and time to have my parents still together,” she said. “It is such a blessing and deserves such a celebration.”

She said it couldn’t have been easy to raise seven children, but they did it.

“They not only raised us well, but they made sure all us of pursued higher education,” she said about her and her sibling who all obtained degrees from four year institutions. “They wanted the best for us and always pushed us to go further.”

The McClouds acknowledge that through their marriage they have had some good and bad times. Over the course of the years, they have lived through segregated times, low wages and are both survivors of physical illness. In addition, they lost their daughter Vernelson “Gail” McCloud about 20 years ago.

“Yeah, it wasn’t sugar and candy all those years,” Preston said. “But, we made it.”