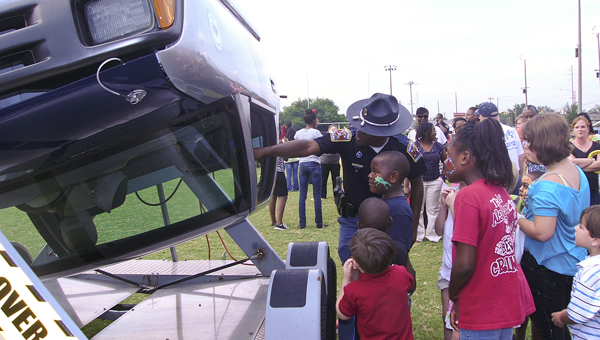 Trooper Charles Dysart gave a demonstration to a group of National Night Out attendees using the “Roll Over Simulator,” which teaches children the importance of wearing seatbelts.

Instead, he was repeatedly dumped into a dunking booth at the department’s National Night Out event at Demopolis Middle School.

The event, designed to heighten drug and crime prevention, included games for kids and also the opportunity to meet local police officers.

“This event is really like an appreciation for the community,” DPD Chief Tommie Reese said. “It is very important for the public to meet their local public safety officials.”

Activities for children included face painting, moon bounces and demonstrations by the department’s Special Response Team (SRT). Suited in fatigue gear, vests and special masks, the team enacted how they would go into a home as a team as kids gathered about mid-field to watch.

“The children seemed to really enjoy the event, they have been giving us handshakes throughout the night,” Reese said.

LaToya Hopes, student at University of West Alabama, came out with her cousin and daughter to enjoy the event.

“My daughter has really enjoyed the activities, she is excited to go the face painting booth,” Hopes said.

The event also included free food, vendors and information tables for community members to visit as they take part in the other activities.

Michael and Tina Grisby represented the National Alliance on Mental Illness (NAMI) table, which is a support group dedicated to improving the lives of individuals and families affected by mental illness.

Chief Reese was not only joined by the support of sponsors, staff and friends of the community on Tuesday, Selma Police Chief William T. Riley, III traveled from Selma to attend the event to show support.

“I think this was a great chance for me to show my support” he said. “It gives the public a chance to see we [police officers] aren’t always the bad guys, we like to have fun too.”

Reese said he was pleased with the turnout and the chance to get the word out how important the community is to the department.

“Because, without the community, we can’t be,” he said.