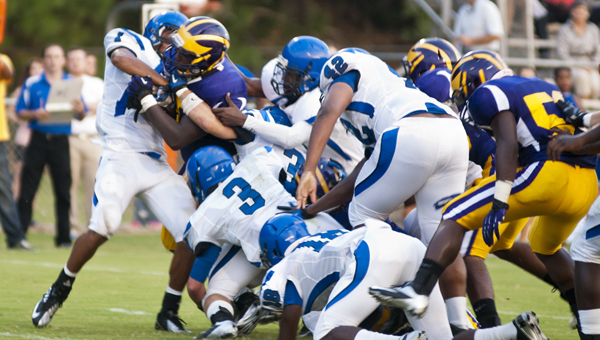 Demopolis High's Demeterius Kemp recovered a fumble on this play early in the jamboree against Sweet Water.

Demopolis High School traveled to Sweet Water to take on the Bulldogs Friday night in this year’s jamboree game. The Tigers won the game by a score of 21-14.

The game opened with a few mistakes by both teams, which is to be expected in a jamboree game. Five minutes into the game, Sweet Water’s Deion Waters fumbled the ball on a run and Demopolis’ Demetrius Kemp recovered. On the ensuing drive by Demopolis, a pass was intercepted by Daniel Sewell. 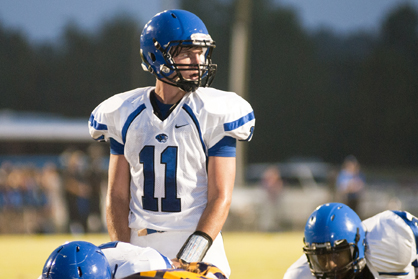 Tucker Jones played quarterback for Demopolis for the first half of the jamboree.

The first quarter ended in a scoreless tie, but on the first play of the second quarter, Jakoby Aldridge of Sweet Water ran for a 23-yard touchdown. This score held for most of the quarter before mistakes began to happen again.

Demopolis had a field goal blocked with about three and a half minutes to go in the first half, but Demopolis returned the favor with a blocked punt by Kemp with 1:45 to go. Harris Etheridge recovered the ball and returned it to the Sweet Water five yard line. Demopolis scored on the next play on a five-yard run by Roderick Davis. A missed two-point conversion by Demopolis made the score 7-6 in favor of the Bulldogs going into halftime.

On the opening kickoff of the second half, the Bulldogs’ Caderius Ward returned it for an 85-yard touchdown, making the score 14-6 Bulldogs.

At the 9:00 mark in the third quarter, both coaches sent in their JV squads to rest the starters for the first official game of the season next week.

Demopolis tied the game with 17 seconds left in the third on a six yard run by Tyrelle Barnett – one of his two touchdowns.

Barnett’s second touchdown came with 5:22 to go in the game, and that was the final scoring play of the game.

Both coaches know there is a lot of work left to do before the season, but they also felt good about their performances.

“We’ve got a long way to go,” Tom Causey said, “but we had some good plays too. We made a lot of mistakes, with the blocked field goal and fumbles, but I’m proud of our young guys. The defense played solid pretty much the whole game.”

“We have a long way to go,” he said, “but I liked our effort and physicality. It was good to play a quality opponent in a game like this.”