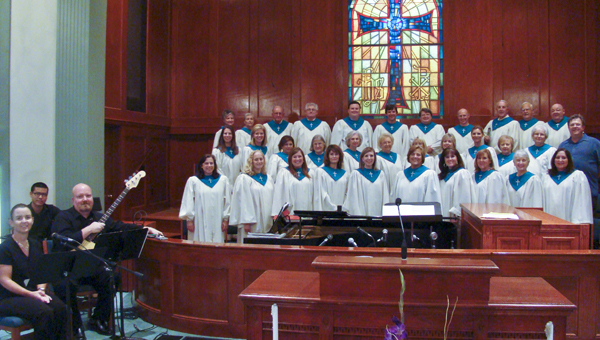 Shown is the choir at the Composer’s Weekend held at First Baptist Church this past Sunday, Aug. 19 at 6 p.m. The choir hosted Robert Sterling of Nashville as the guest composer.

Music and songs filled the sanctuary of First Baptist Church, Demopolis on this past Sunday during Composer Weekend as the choir performed songs by guest composer Robert Sterling from Nashville.

“It was a great concert and I think the choir did a beautiful job,” Pastor Carl Williams of FBC, Demopolis said.

Sterling met Ed Rush, current minister of music for FBC, at a composer’s symposium in Atlanta a while ago and Rush invited Sterling as a guest composer for the event.

The choir, which included invited choir guests from other churches, sang several songs after numerous weeks of practice.

Rush said in preparation for composer weekend, he tends to learn a lot about composing and is able to enhance his knowledge as a composer.

“We have down composer weekend every year, with the exception of two years, in my 15 years here at the church,” Rush said. “Since I am retiring, I am not sure whether the next minister of music will continue the event.”

Rush said he felt the concert went well and the choir was in excellent voice.

Sterling and Rush have worked together to arrange music as they did with the selection, “The Very First Christmas Morn.”

“We wrote the song together and it will be published next year for other churches to be able to pick up and use for their youth choirs,” Rush said.

Williams said although it was quite funny to hear a Christmas song in August, but the concert had a good range of music styles.

“It was truly a great experience for the church,” Williams said.