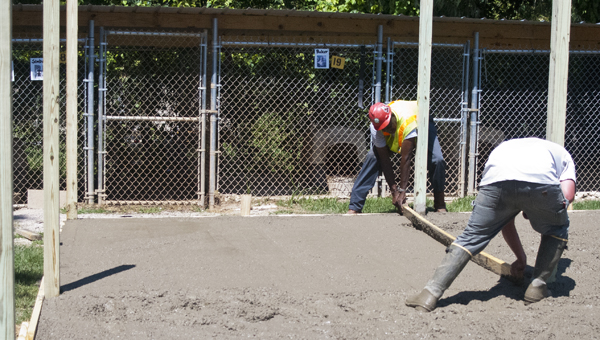 Volunteers and workers from River City Industries work to pour concrete in the dog pens at the animal shelter.

Donations from CEMEX and River City Industries will allow the Demopolis Animal Shelter to pour concrete floors for its dog pens.

Since the Bigbee Humane Society partnered with the city of Demopolis two years ago to take control of the pound, a top goal has been to fix the pens, which would turn into a muddy mess after heavy rains.

That goal became a reality Monday when the first concrete was poured.

“It is a dream come true for us,” said Cindy McDonald, head of the Bigbee Humane Society. “We have been working hard these past two years to get this done.”

McDonald said the concrete will cut down on veterinarian bills because dogs were vulnerable to worms after rain water receded.