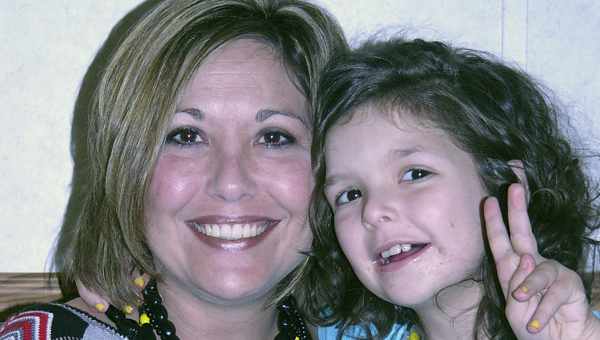 To some, this may just be a long scientific word, but to Jennifer Thomason of Demopolis and her daughter Anna-Coleman Yelverton, this word began the start of a life altering journey for the both of them.

“Rhabdo” as it is called for short, is a form of cancer Anna-Coleman was diagnosed with on May 25, 2010, when she was only eight years old. After excruciating headaches and a sinus infection, the results of a cat scan caused Thomason to hear words she never thought she would hear: “Your daughter has cancer and it is bad,” Thomason recalled.

From there, Thomason describes that day as when “we” got diagnosed, as she has taken this journey with her daughter. As Anna-Coleman has endured: a tumor biopsy, 58 days of chemotherapy, a total of 78 chemo injections, three types of chemotherapy and several other treatments regarding to her cancer diagnosis.

When Coleman was first diagnosed the community rallied in support of her and was there for the family through their journeys back and forth to Children’s Hospital in Birmingham. Through community fundraisers and support, Thomason said she was able to take off for a year and a half to care for Anna-Coleman.

“This community loves Anna-Coleman,” she said. “Not a day goes by, when I am sitting at my desk at the bank that people don’t ask ‘how’s our girl doing?’”

She said she couldn’t have made it through this without the large community support and her family at the bank doing things like helping her with her bills and checking her mail.

“The people of Demopolis truly took care of us and for that I am truly grateful,” she said.

On February 22, 2011, Anna-Coleman Yelverton celebrated her “No’ Mo’ Chemo” party by dancing to oldies music at Children’s Hospital with her family, nurses and friends.

For Jennifer, she recalls that party being one of the funniest moments for Anna-Coleman and how it showcases how much she has never let her illness stop her.

“Just before her party, she had taken a treatment of chemo and it made her a little sick,” she said. “While she was dancing, she started to get sick and although it touched my heart to feel for her as I saw her pain, she kept dancing and I couldn’t do anything but smile.”

In June of 2011, Anna-Coleman went for a scan and was told her cancer was in remission. Since, she has continued to go to school, enjoy her pastimes of riding her four-wheeler and watching movies with her mom.

“Over the years, it has been pretty amazing how the tumor has gotten smaller,” Thomason said. To illustrate the size of the tumor, Thomason said at first, it was like an octopus. It had a core, and then fillers coming out of the tumor like legs.

“Now the tumor is about the size of a large marble,” she said.

Through all of the trials of their family, Thomason remains in good spirits and said she lives everyday thankful and grateful that she has her daughter.

Just this past Saturday, Thomason attended the funeral of a six-year-old boy who had the same type of cancer as her daughter and she met their family during Anna-Coleman’s radiation treatment.

“It just makes me realize how blessed we are and how big of a miracle Anna-Coleman is,” she said. “She is happy, healthy and sometimes able to go to school and interact with other kids.”

As September is Childhood Cancer Awareness month, Thomason has put one of her ideas into action and created T-shirts to sell to benefit A-Team ministries, an organization that has offered support to her and other families of cancer patients.

The hot pink t-shirts read “Anna’s Angel’s” on the back and list people they know who has cancer, has had cancer or has “earned their wings” from cancer, as Thomason describes those who have passed away. The shirts are $20 and can be purchased from Jennifer Thomason at Robertson Bank main office.

Despite her low-immune system, she continues to go to school when she is able to go. In addition to battling cancer, Anna-Coleman also faces scoliosis and her right leg is two inches shorter than her left. She wears a lift on her right shoe to compensate for the difference. She also is physically a year and a half behind in growth than other 10-year-olds.

From the radiation, Anna-Coleman suffered damage to her optic nerve causing her to go blind in her right eye.

Despite that, Thomason is still able to find the brighter side to the situation and said “but she doesn’t let that stop her, she can still see just fine out of her other eye.”

“This is truly my testimony,” she said. “God brought us through this so that we can share what He did for us. Jesus shines through Anna-Coleman everyday, every single moment…she truly is the strongest person I know.”