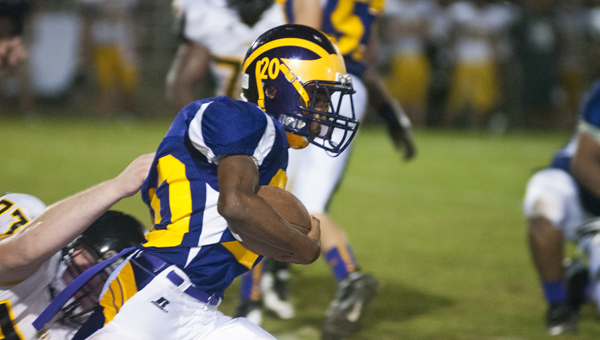 Ladonta Dunson runs the ball in the second half of the Sweet Water-Leroy game.

The Sweet Water Bulldogs racked up rushing yards in a 45-0 shutout against Leroy.

The home time struck early and often, enjoying a four touchdown lead by the end of the first quarter.

Jakoby Alridge found the end zone first with a 36-yard run. Alridge had a stellar night, finishing with three touchdowns and 125 yards on nine carries. He scored the team’s second TD too on a 25-yard run.

From there, the team never looked back, getting points on the ground and through the air.

Demarcus Gamble also had a great night rushing, getting two touchdowns and 45 yards on seven carries. Jarvis Lewis added another 55 yards on five carries. Caderius Ward also had a touchdown and 15 yards on four carries.

The team ended up with a total of 268 yards on the ground.

“I thought we came out fast, and we took them out of the game early,” said Luker. He added that Sweetwater was help by some early Leroy turnovers.

Friday night’s game was the first regional contest for the Bulldogs. Luker said is time has “a lot of potential” but need to work on several areas.

“I think our football team has a long way to go,” Luker said.