Fighter’s spirit, on field and over cancer 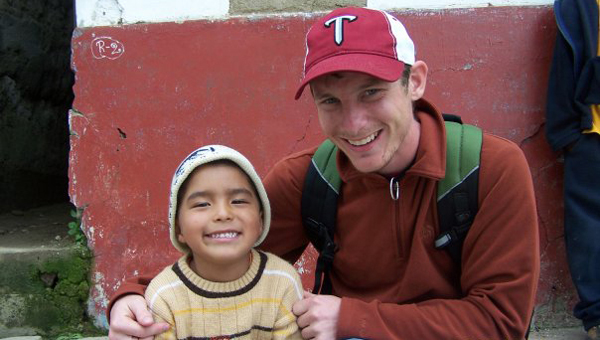 Chris traveled to Peru in 2009 with a group of students from Troy with the Baptist Campus Ministry. He is shown with one of the children he met during his time there.

Chris Wasson, now a 26-year-old graduate student at Troy University, not only beat opposing baseball teams as a young athlete, he also is the winner in a much larger battle—the fight against childhood cancer.

Just about two years after being diagnosed with childhood cancer in February 1999, which manifested in the form of non-Hodgkin Lymphoma, Chris and his family were fortunate to hear the combating words to his diagnosis, “You are cancer free.”

When 12-year-old Chris felt weak and couldn’t throw the baseball at practice one Saturday, his parents knew something wasn’t right.

“I was 12, so I knew what was going on during my diagnosis,” Chris said. “When it happened, I knew I had to take it step-by-step and not let it get me down. I naturally have a fighter’s spirit, so I looked at it as another thing I could beat.”

Only a few weeks prior to the baseball practice the Wassons will likely never forget, Chris showed his mom and dad a bump on his head. However, Chris and his older brother played around a lot causing them to be certain it would soon go away. 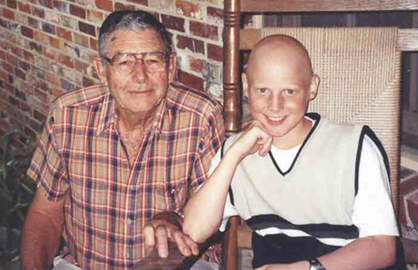 Chris Wasson was diagnosed with non-Hodgkin lymphoma in February of 1999. He is shown with his grandfather Ben McGehee sitting on the porch at home in Demopolis.

“When the bump didn’t go away and he wasn’t himself at baseball practice, we went to the doctor,” Faye Wasson, his mother, said. “About a month later, they removed the bump, and ran some test leading to the diagnosis.”

After Chris’s diagnosis, the doctors at Children’s Hospital gave him a 2-year plan outlining his need for scans and chemotherapy treatment.

Danny Wasson, Chris’s father, said he admired the way Chris never let cancer define him or stop him from doing anything.

“I remember when we were at the hospital and the nurse assisting the doctor took Chris out of the room while the doctor talked with his mom and I about how he was doing. I remember Chris telling the lady, ‘they are talking about my brain, I think I need to be in there.’ From there, we just sort of followed his lead on things,” he said.

As an athlete, Chris held strong to his love for sports and continued to play throughout school with his high school regional summer league.

“After Chris was diagnosed, two other boys had cancer on his team as well. It was truly something to look out on the field and see three cancer survivors playing for the team,” Faye Wasson said.

The Wassons look back over their battle as something “they got through,” but they credit the support of the city of Demopolis as one of the sources of support during this tough time.

“In the blur of that time, we knew so many people were doing a lot for us and we were so thankful,” Danny said. “The doctors at Children’s were also very miraculous.”

“This city truly does take care of you,” Faye said. “Chris’s name was on several prayer list from here all the way to Sweet Water.”

On Chris’s current journey to obtaining his master’s at Troy, he recently learned his 21-year-old friend was diagnosed with Breast Cancer.

“It just shows how God puts people in the right place in order to be a support system for one another,” he said.

Chris anticipates completing his master’s at Troy in Sports and Fitness Management this summer in hopes of going into the media relations field for a college or athletic team.

“Childhood cancer, like any cancer, is important to know about. Even though the survival rates are up from when I was diagnosed, there are still a lot of parents that lose their kids to this. I think all people, in Demopolis, across America and all around the world need to know how cancer affects people,” Chris said.