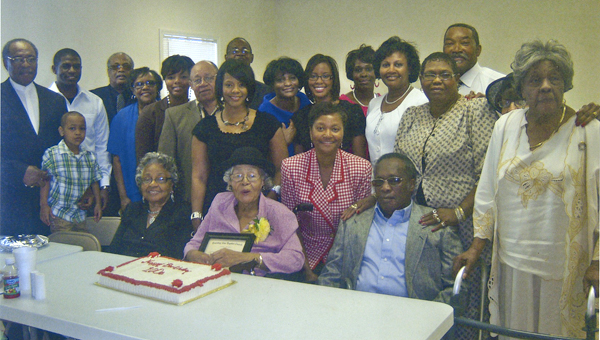 This year, she celebrated 102 years of life with family at Woodhaven Manor on Sept. 5, 2012. Shown is Amelia Jackson Zanders (front) celebrating her 100th birthday on Sept. 5, 2010 with her family and friends.

Not many can say they haved lived from the presidency of William Howard Taft in 1910 through that of Barack Obama in 2012.

Over those 102 years, much has changed in America and Amelia Jackson Zanders lies among few who has been here to witness it all.

Described as the “root” of their family, Amelia gathered with family on Sept. 5 to celebrate her 102nd birthday.

When asked why she felt she lived so long, she smiled and responded, “I don’t know. It’s just the good Lord. I’m living this long by God’s grace.”

Evelyn James, her granddaughter, said their family came out to Woodhaven Manor to visit Amelia for her birthday, and they gave her a celebration when she turned 100, two years ago.

Not very many memories fall faint in Amelia’s mind as she recalls several of her life’s events and continues to share stories with the generations that have come to follow her all the way to her great-great-grandchildren.

From Pearl Harbor in 1941 to fighting for equal rights as a woman and an African-American, Zanders has survived many of America’s stories including the election of the first black President.

“I didn’t think I would ever see a black man in the White House,” she said. Amelia still votes because she said “people died for us to have that right.”

Amelia moved to Demopolis in the 1950s and recalls growing up in Hale County, where she remembers working the cotton fields from sunrise to sunset. “I could sure pick,” she said. 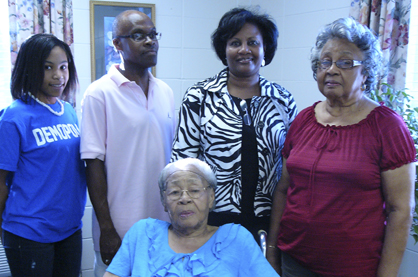 Her daughter, Minnie Scott, 86, said words can’t describe how she feels about her mother celebrating 102 years of life.

Aside from a limited hearing problem, Amelia is doing well. She has several pastimes, which include watching television, especially football.

“I told her she loves every sport with a ball,” her daughter said.

She always takes time to enjoy Sunday and Monday night football and cheer on her favorite teams, including the New Orleans Saints and Atlanta Falcons.

Amelia’s family visits her regularly. Jasmine Zanders, 14, said she thinks it is great to still have her great-grandmother.

“I think it is very interesting to hear her stories,” she said.

Amelia, currently resides at Woodhaven Manor and has been there for about a month. She was preceded in death by her parents, her husband and five of her nine children. She remains in touch with one of her cousins, who is 100-years-old.

As a believer in God, Zanders holds strong to her faith and recalls when she recently asked God to show her heaven and he presented it to her in a dream.

“I don’t worry about anything because I have seen heaven. In my dream, I asked God to let me come in, but he said ‘I’m not ready for you yet.’”

As the Zanders family moves forward and continues to cherish all of life’s moments, James recalled a fond quote from her grandmother about heaven, “She always tell us ‘Don’t you worry about me when I leave, just be sure to meet me.’”