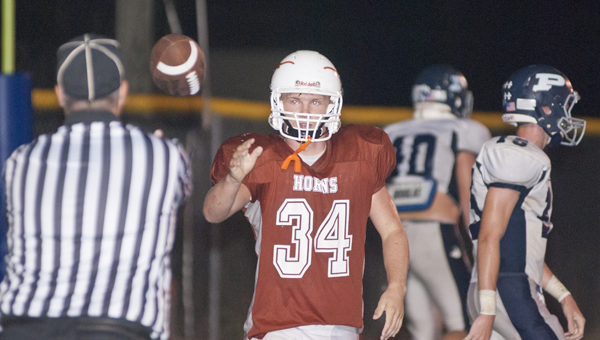 Brant Lewis throws the umpire the football after his 5-yard TD run.

A 10-minute march by the Patrician Saints ate up most of the third quarter, helping secure a 16-6 victory over Marengo Academy on Thursday night.

“This is a real good football team,” Marengo Academy head coach Robby James said. “For us to play as well as we did … we’ll take a lot out of this. We are a young team. We’ve got a lot to learn.”

The visiting team struck first, but only after a scoreless first quarter and a missed Longhorn field goal. Patrician bruiser Parker Allen found the end zone from 12 yards out with 7:28 to go in the second quarter. A successful two-point conversion by Caleb Bonner put the Saints up 8-0. 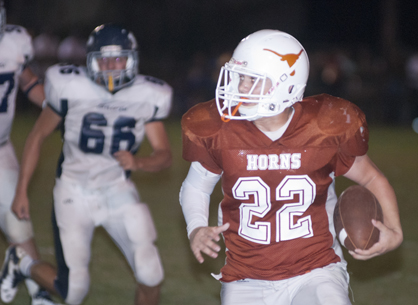 Josh Holifield had a solid night on the ground, netting 39 yards on 15 carries.

Marengo Academy responded with a nice drive of its own, featuring long runs from quarterback Hayden Huckabee and Josh Holifield. However, a fumbled ball pushed the team back, forcing the Longhorns to punt.

A spectacular kick from Brant Lewis pinned Patrician back to their own 5-yard-line. A dash from Dalton Guinn quickly got the visitors better field position, but a bad throw was intercepted by Tyler Barkley.

A nice run by Christian Cook gave the Longhorns a chance to score in the first half’s waning seconds, but the team ran out time before putting points on the board. 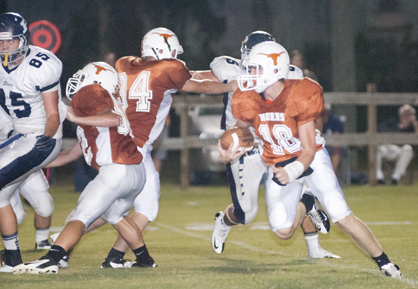 Quarterback Hayden Huckabee led his team in rushing, raking up 80 yards on 13 carries.

Patrician started the third quarter with a backbreaking drive of almost 10 minutes. Marengo Academy’s defense stood tall when it mattered the most though: Cason Cook recovered an Allen fumble inside the 2-yard-line to stop the Saints from scoring.

The Longhorns again tried to drive behind runs from Huckabee and Holifield, only to have the ball picked-off on the first play of the fourth quarter.

Patrician would capitalize on the mistake, which a few plays later led to a 10-yard touchdown run by Gentry Allen. Another successful two-point conversion gave the Saints a 16-0 advantage. 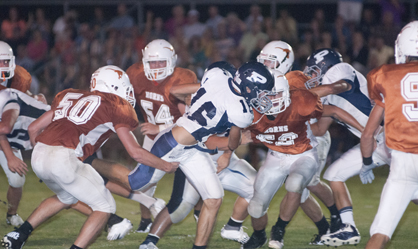 The Longhorn defense played solid in the loss, holding Patrician scoreless in the first quarter and collecting two sacks and an interception.

Marengo Academy would fight back though to make a game of it. A 27-yard pass from Huckabee to Cook helped set up a 5-yard TD run by Lewis. The Longhorns’ two-point play was no good, which capped scoring for the night at 16-6. The home team tried for the onside kick but didn’t get the bounce they needed.

James said he was proud to see his team’s resilience: “They all want it. They all have that desire to win.”

Sole Senior Kyle Adams led the defense with 10 tackles and a sack.