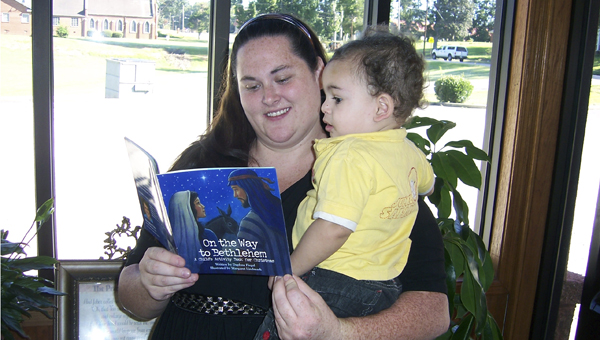 Contributed photo C.R.I.B.S. strives to instill in the minds of children that Jesus Christ is real through realistically illustrated Bible story books. Shown is Danielle Wilson reading to her son Aidan, the book that will be distributed to children this year titled, “On the Way to Bethlehem.”

During a Christmas season years ago, Kathy Lewis had a conversation with her two nieces as they were driving home one evening that would soon steer her life’s journey in a new direction.

On the ride home, her nieces entertained her questions and identified all of Santa’s reindeers. However, when she proceeded to ask them ‘who was the mother of Jesus?’ and ‘who was his Earthly father?’ she found they didn’t know.

“So after learning that, I decided to look for them a Christmas story book or a children’s Bible. I knew I wanted something real and after visiting several stores, I just had to settle for a cartoon pop-up book,” she said. “But, Jesus isn’t a cartoon, he is real.”

Even after she persisted to look after the Christmas holidays, she still couldn’t find a book that illustrated Jesus in human form and was written realistically, in her opinion. From this experience, the organization called C.R.I.B.S. evolved.

“It stands for Characters Realistically Illustrated in Bible Stories and it started 11 years ago,” she said. “We now have sponsors in Alabama, Mississippi and Louisiana that distribute books in different areas.”

The organization began serving kids in Choctaw County and has evolved over the years now serving four counties in Alabama including Choctaw, Washington, Clarke and Marengo. This year, the organization plans to distribute between 400 to 500 books to kindergartens in the area.

“I think once parents are aware of how difficult it is to find realism in Bible stories, hopefully it will create a market for these books,” she said.

Describing the idea as one God placed on her heart, the organization seeks to place books in the hands of children that portray Jesus in human flesh and have real people as the characters telling the story.

Lewis grew up mostly in Choctaw County, but moved to Linden three years ago. She was a school teacher for more than 30 years and taught kindergartners for a portion of that time. Now, she is the owner of Whistle Stop Cafe in Linden, in addition to working with C.R.I.B.S.

“The thing is it’s not as easy for me to talk about teaching or talk about my restaurant, but I can tell you about C.R.I.B.S. – this is my heart.”

C.R.I.B.S. is able to distribute the books to children through the support of individuals sponsors, businesses or churches. The average cost for each book including administrative cost is $2. Those interested in sponsoring books for a group or school can email cribsbiblebooks_09@yahoo.com.

“My dream for this idea is maybe one day I will be able to walk into Wal-Mart or a Christian bookstore and see a lot of books realistically illustrated and written. That would be amazing,” she said.