A project being led by Tutt Land Company in Linden hopes to bring big bucks — both trophy deer and economic growth — to Marengo County.

The Big Buck Project hopes to restore “record book genetics” to the whitetail population by releasing trophy-class breeder bucks across the county this fall. 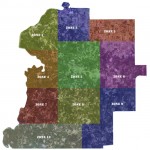 Hunters can vote online at bigbuckproject.org where in the county they want to see trophy-class breeder bucks released.

The effort is already creating waves across the hunting industry in Alabama and the Southeast.

“It’s going to bring a huge amount of attention to Marengo County,” said Hale Smith, a sales associate and land manager at Tutt Land Company. “We are seeing a huge positive response. A lot of eyes will be on Marengo County.”

The idea is simple — introduce bigger bucks into the local population and genetics take over.

The company has already conducted a controlled 5-year research project that showed promising results in herd health and antler growth after new genetics were introduced into a local herd on an enclosed 1,300 acres.

Planners now hope to take the same concept and apply it to the county as a whole, Smith said.

The deer will be released in coming weeks, most likely after the first frost. They will be mostly young deer with 200 class genetics.

The deer will be purchased from a state licensed deer breeding facility and released on private property.

The number of bucks released will depend on support from partners and landowners. Currently, First Bank of Linden and Gaddy Electric and Hardware have signed on as partners.

While the project has hunters excited, it also has the potential to help grow the economy, Smith said.

“We really wanted to do a project to help promote the natural resources of Marengo County with something unique and groundbreaking,” Smith said. “You got to sell what you have, and one of the greatest things we have in this county is our deer hunting and our outdoor experience.”

There’s been discussion about tagging the deer for identification, though no final decision has been made about that. Once released, the deer become state property and fall under state hunting regulations.

More about the project can be found online at bigbuckproject.org. Hunters can even vote where in the county they want the deer released.