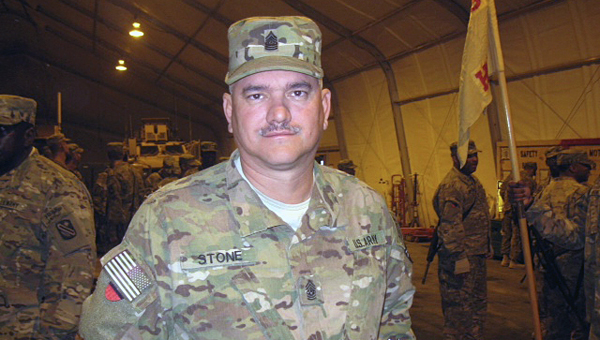 Command Sgt. Major Russell Stone was awarded numerous medals during his recent deployment to Afghanistan, including the Bronze Star.

Command Sgt. Major Russell W. Stone of the Belmont community has earned several medals during his deployment to Afghanistan, including the Bronze Star Medal.

He also earned the Afghanistan Campaign Medal (with one service star), the North Atlantic Treaty Organization-International Security Assistance Force medal, the Good Conduct Medal and the Overseas Service Ribbon for his outstanding performance and leadership.

Stone is returning from an 11-month deployment at Shindand Airbase, Afghanistan, where he was the Senior Enlisted Advisor of the 365th Combat Sustainment Support Battalion (CSSB) out of Jackson, Miss.

Stone is married to Sherry Stone, daughter of Don and Jane Capps of Gallion. They have two daughters and a son-in-law, Stephanie McAlpine wife of Jim McAlpine of Gallion, and Tabitha Stone of Belmont. They are the proud grandparents of John Wayne (JW) McAlpine and Wyatt McAlpine of Gallion.