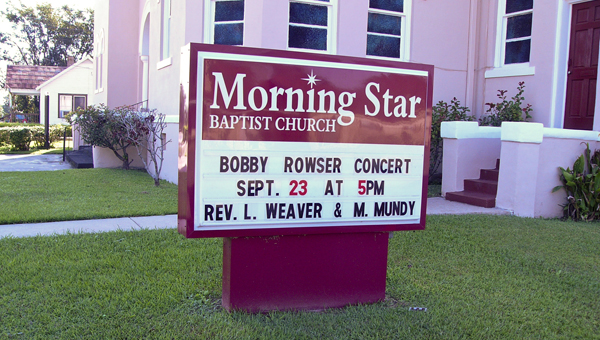 The Bobby Rowser concert at Morning Star Baptist Church will be Sunday, Sept. 22 at 5 p.m.

The members of Morning Star Baptist Church in Demopolis, have been busy with back-to-back events lately with their annual brotherhood day this past Sunday and their annual Gospel concert Sept. 23 held at the church.

Gathering men together to lead the program and promote unity are some of the focuses of the program, deacon Milton Young said.

“Brotherhood is always promoted but this event is like a culminating event for something we always strive for,” he said about the event, which is always held in September.

Young has been an ordained minister since the late 60s and has been a member of Morning Star since that time. He was born and raised in Demopolis.

The event is also a time Morning Star uses to invite other churches to participate in the event through song and to give the sermon.

The messenger for the event was guest pastor Schmitt Moore, who visited from Bethel Baptist Church in Tuscaloosa. His message aligned with the theme and inspired listeners to be “Followers when there is no me.”

The theme, taken from Philippians 3:17, was “Brethen, be followers of me.”

“We always open the event to everyone who wants to hear the good word of God,” he said. “We really had a lovely time.”

Christian Chapel Baptist Church participated in the program by combining with the Morning Star male chorus to bring musical selections.

In addition to the messenger traveling from Tuscaloosa to support the program, he was accompanied by his male chorus, who gave a musical selection at the event.

Another component of the event is to call for male leadership in the organization of the event. Milton Young and Nathan Hardy, both members of the church served as chair and co-chair, respectively.

After a successful brotherhood day, the church will now prepare for another annual event, the Bobby Rowser concert held Sunday, Sept. 23 at 5 p.m. at the church. The event will include several local singers.

“The event is held in honor of a former member who passed away and was a musician. This event is in efforts to keep his memory going, it has become an annual concert,” he said. “It has been going on at least the last five or six years.”

Some of the musicians include the Golden Echoes of Thomaston, the Angelic Voices of Greensboro, Rev. Lonnie Weaver and Genesis of Tuscaloosa and Michele Mundy of Starkville, Miss.

“Church events are very important and it is important for the church and the community to work together,” Young said.