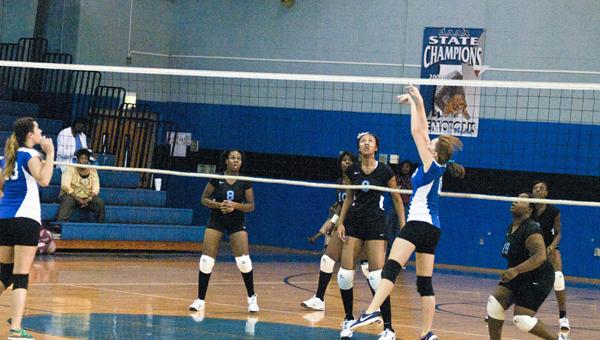 Demopolis senior Cailin Bamberg sends the ball back over the net in Tuesday's match against Selma.

The Lady Tigers won game one by a score of 25-20, and they led through most of the game.

In game two, Demopolis fell behind early and could not overcome the deficit, losing 25-18.

Game three went down to the wire, as the score was tied 24-24. Both teams played well in this game, but Demopolis came away with the 26-24 win.

Game four was close until about midway through and Selma pulled away to take a 25-19 win.

Game five was close, but Demopolis could not get any momentum going late and fell 15-12.

Head coach Blythe Smith said that despite the loss, she was proud of how the team performed.

“I’m proud of our effort,” she said. “We fought hard and came back in game three, but we just couldn’t get ahead in games two and four.”

Although no loss is a good loss, Smith said it’s better to lose when you play well.

“We gave 100 percent effort and Selma played hard,” she said. “A loss when you play well is easier to take than when you get beat 25-4 or something.”

This loss drops the Lady Tigers to 1-5 on the season and 1-1 in area play.