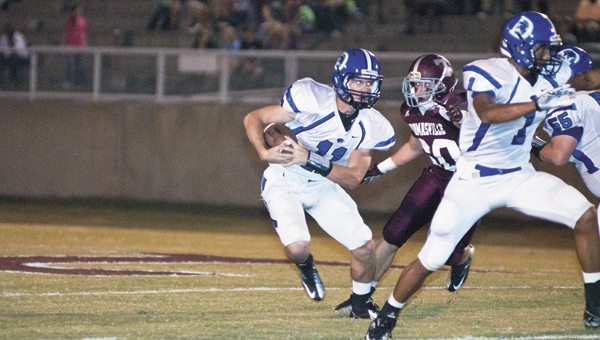 The Demopolis Tigers jumped out to an early lead over the Thomasville Tigers Friday night and held on in the second half to win 27-26.

“I’m proud of our kids in the fourth quarter,” Tom Causey said. “They needed that test. They hadn’t been tested like that yet.”

In the first quarter, Demopolis took the lead on a 3-yard touchdown run by Tucker Jones with 7:46 to go in the quarter. On the next drive, a big pass play set up a 9-yard TD pass from Jones to Cortez Lewis, making the score 14-0. On Thomasville’s next play from scrimmage, they fumbled and the ball was recovered by Demopolis. The first play of their drive was a 56-yard catch and run by Cortez Lewis which gave Demopolis a 21-0 lead at the end of the first quarter.

A 10-yard TD pass made the score 21-6 after a blocked extra point. This score stood until the third quarter.

Demopolis opened the second half with a long touchdown drive that lasted for nearly seven and a half minutes. It was capped off by a 2-yard run by Tyrelle Barnett to make it 27-6 Demopolis.

Thomasville then scored 20 unanswered points and had a chance to win the game late until a Thomasville pass with 1:13 to go in the game was intercepted by Mason Rogers.

“I give credit to Thomasville and their coaches for keeping the ball away from us in the second half,” Causey said. “They are a first-class program and they play the game the way it’s supposed to be played. It was a great team win.”

Assistant coach Matt Geohagan was not with the team Friday night, and Causey said he was proud of how the other defensive coaches stepped up and filled his shoes in his absence.

Demopolis is now 5-0 overall and will travel to Greenville next week.