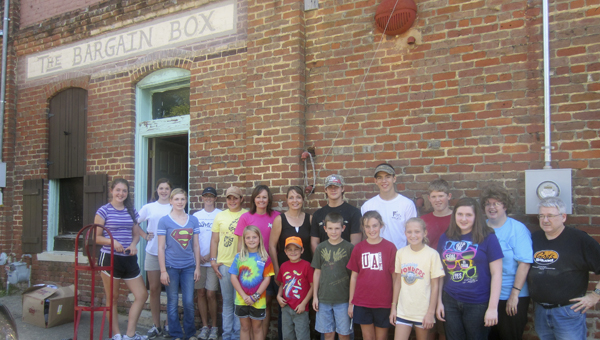 The Bargain Box provides 15 scholarships totaling around $40,000 every year to graduating seniors who have a financial need and exhibit good grades.

Women from the churches in the area volunteer each day to work in the facility.

Lorena Wilson, leader of the Marengo Rangers’ Homeschool 4-H Club, is a volunteer.

The group said they saw the need to help with moving inventory and wanted to recognize the outstanding work the women who work at the Bargain Box perform for the community.

Hundreds of boxes of clothes and other items needed to be brought down from upstairs at the facility and moved to a vacant warehouse next door to be sorted through.

On Monday, Sept. 10, many of the club members and parents showed up to transport the boxes and organize them into categories.

With all the help and an assembly line, the boxes were moved in a couple of hours.

The Bargain Box is sponsored by the Demopolis Council of Church Women, but they take donations from anyone in the community. They are open six days a week from 9 a.m to noon and they give receipts for income tax deductions.