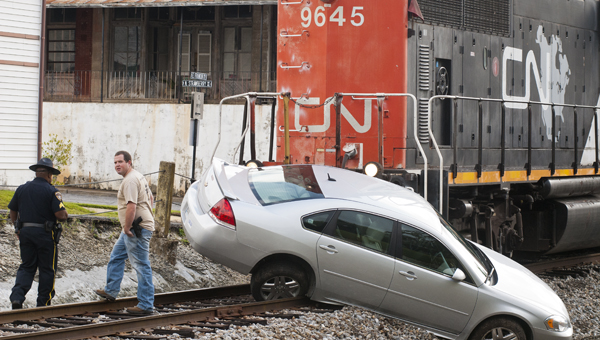 A car and train collided Monday morning in Demopolis.

There were no injuries Monday morning after a train and car collided in downtown Demopolis.

The accident happened at the crossing on Strawberry Avenue about 8:35 Monday morning.

The Chevy Impala was hit by a Norfolk Southern train in the driver’s side door and dragged some 30 yards down the tracks.

Fortunately, the driver, Bill McGillivary, was able to climb out of the vehicle through the passenger side without any serious injuries. He was still on the scene talking with responders after the accident.

McGillivary said he didn’t hear a whistle before crossing the tracks.

Strawberry Avenue was closed for some time as train company officials conducted their investigation.

Demopolis Police Department Chief Tommie Reese and other officers responded to the scene. Reese said any additional comment would be premature prior to the filling of the accident’s official report.