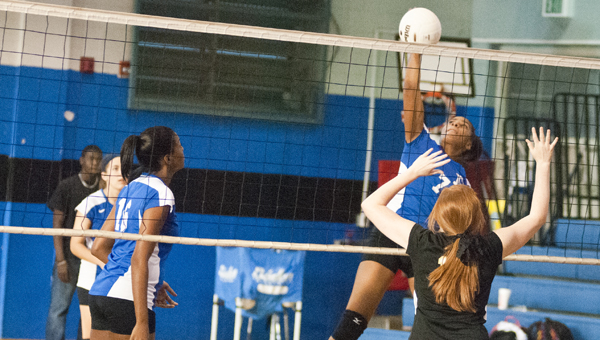 Ivery Moore knocks the ball over the net against Greeville. Demopolis won the battle of Tigers in three sets.

The Demopolis Lady Tigers volleyball team hosted the Greenville Tigers Wednesday night, and won the match 3-0. This is Demopolis’ second win of the season.

In the first set, Demopolis jumped out ahead to a big lead early, and never looked back. They won by a score of 25-8.

In the second set, Greenville was able to get out to an early 5-0 lead before Demopolis came storming back. They tied it at 6-6, then took the lead and never looked back. Demopolis won the second set by a score of 25-11.

The third set was not even close. Demopolis had scored 10 points before Greenville was able to get their first, and then went on another long run of serves, jumping ahead 19-2. Greenville was only able to muster one more point, and lost the third and final set 25-3.

Head coach Blythe Smith said she hoped her team came away with the knowledge that they are able to win games after losing most of their matches this season.

“We had a better attitude coming into the game today,” Smith said, “and we communicated better. I hope they take away from this game the knowledge that they can and are able to win, and that if they have good attitudes, they can still be successful this season.”

Smith added that the regular season record only determines their placement in the area tournament, and a good showing there could land them in the regional tournament again.

“I think this game gives us a big confidence boost, and it was something we really needed,” she said. “There is still the possibility of a little bit of a turnaround before the season is over.”

Demopolis travels to Greensboro Thursday afternoon to take on the Raiders.