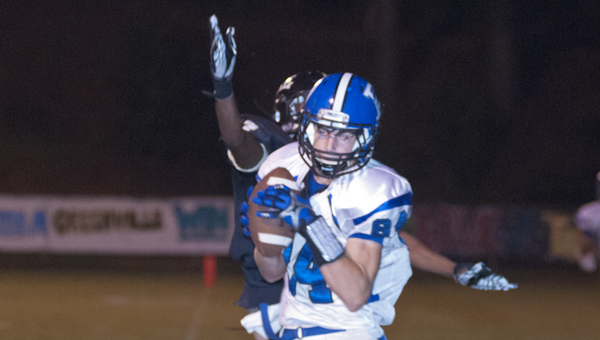 Brock Montgomery hauls in a 10-yard TD catch against Greenville.

Demopolis went on the road in Week 6 and earned a victory over another set of Tigers in Greenville.

The visiting Tigers won the game 21-3. The momentum swung in Demopolis’ favor late in the first half after Greenville got off to a 3-0 first quarter lead.

“We knew it was going to be a physical, hard-nosed game,” said Demopolis head coach Tom Causey. “I thought we played well on both sides of the ball.”

The last 6:56 before half time saw Demopolis go from being down by a field goal to carrying a 14-3 lead into the lockerroom.

Greenville hung to the 3-0 advantage after a 32-yard field goal by Ozell Carter.

Demopolis would respond and get on the board via a 3-yard Roderick Davis.

Less than two minutes later, Greenville would line up to punt, but the snap sailed high over the kicker’s head. It was recovered on Greenville’s 8 yard line.

The Tigers in white and blue allowed no points in the third quarter, despite it being played almost entirely on DHS’s side of the 50.

A strong defensive stand, which included a fumble recover by Tyler Merriweather and an interception by Peyton Pearson, kept Greenville off the board.

On the drive after Pearson’s pick, a long catch from Rodney Harper and a run by Demeterius Kemp set up a short TD on the keeper from Jones with 56 seconds to go in the third. The points capped scoring for the night at 21-3.

Sebastian Hale also got a fumble recover late in the game.

Greenville actually finished the night with more yards than Demopolis, 22o to 210.

GHS has 174 yards on the ground and 46 through the air, compared to 76 rushing yards and 134 passing for Demopolis.

Montgomery had four receptions for 74 yards, including the touchdown.

On defense, Merriweather had five tackles, five assists, a sack and the fumble recovery.

With the win, Demopolis improves to 6-0 on the season and 4-0 in regional play. The team will face Sumter Central next week for Homecoming.