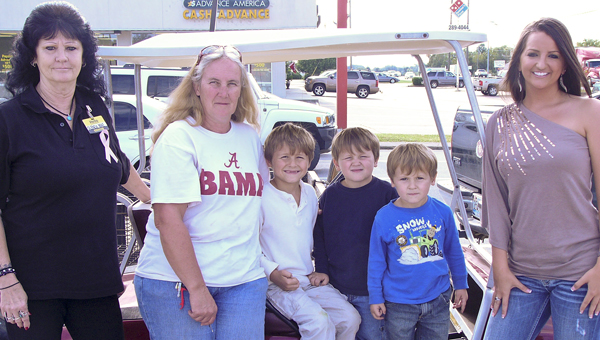 Dollar General and other businesses have joined together for the Demopolis Cares project. As a part of their first fundraiser, raffle tickets to win a golf cart were sold. The golf cart was donated by River City Bike Club. Shown from left are Glenda McCray, Dollar General representative, Betty Colley, golf cart winner, her grandchildren Andrew, Austin and Hunter Wyatt and Alana Williams, River City Bike Club representative.

A fundraiser to make sure children and the elderly have a great Christmas will officially kick off this Saturday.

Groups participating in the event include the Demopolis Police Mobile Command Unit, the Demopolis Fire Department, Harriet’s House and others. Pizza, hot dogs, drinks and baked goods will be sold with proceeds going to the fundraiser.

Dollar Store general manager Deana Pritchett created Demopolis Cares to help ensure those who may be forgotten during the holidays aren’t.

“Our goal is to give every patient in our local nursing home and assisted living facility a gift basket and also any and all elderly shut-ins that we can possibly reach,” Pritchett said.

In addition to Dollar General, numerous other businesses in the area contribute to the project.

Pritchett said Demopolis Cares is personal for her as she takes care of an elderly man and took care of her husband’s grandmother after she had a stroke.

“Sometimes the elderly are forgotten,” she said.

This past Saturday, the store concluded their first Demopolis Cares fundraiser and named the winner of a raffle for a new golf cart donated by the River City Bike Club.

Raffle winner Betty Colley drove home with her new golf cart Monday afternoon. She was accompanied by her excited grandchildren, who yelled “Roll Tide” as they took photos in the cart decorated with the Crimson Tide “A” on the side.

“One-hundred percent of the proceeds will go to the Demopolis Cares project, which will officially kick-off this Saturday,” Pritchett said.

Another golf cart raffle will come soon to the store and customers can purchase tickets at the Dollar General.

The organizations and persons that will be benefit from the donations include: local nursing homes and seniors as well as Marengo County Department of Human Resources and other children.

Local church youth groups including Christian Chapel and Fairhaven will wrap the gift baskets and toys that will be given out as a park of the project.