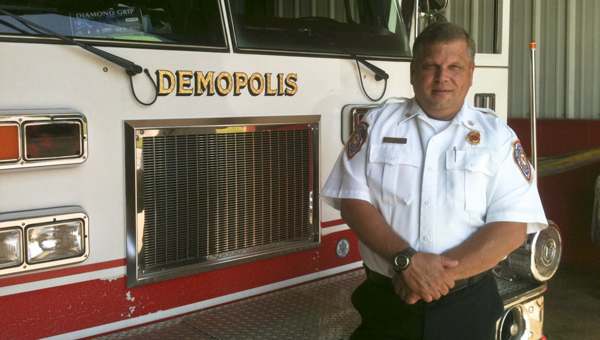 Demopolis assistant fire chief Carl Johnson will retire later this month after 25 years with the department.

Demopolis assistant fire chief Carl Johnson will hang up his helmet later this month after 25 years with the department.

Johnson started with the department in August 1987 as a firefighter and worked his way up through the ranks to captain and then assistant chief.

At one time early on he worked three jobs to support his family, but his passion always remained with his work at the department.

Johnson said he was asked soon after he started why we wanted to be a firefighter. At the time he said because he had lived in Demopolis all his life and “wanted to give back to the community.”

He said that statement has become more true each year, especially through the department’s community outreach programs.

“God lead me to this career,” Johnson said. “It’s been real rewarding.”

Demopolis Fire and Rescue Chief Ronnie Few said Johnson found success because he is natural leader and “knows everybody.”

“Carl has been a tremendous asset to not only our department but to the entire community,” Few said. “Carl knows people in every segment of the community. That shows me the kind of person he is. I don’t know how this department will be the same without assistant chief Carl Johnson.”

Johnson’s last day of the job will be Oct. 19, though he plans to continue working with the department’s Hazmat team on a volunteer basis.

Johnson’s wife is Charlie Johnson. They have two children, Charles David and Carly. His parents are the late William A. and Lenora Johnson.