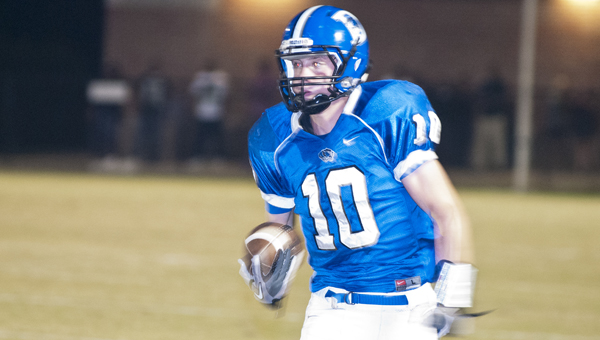 Tyler Oats returns an interception to the 3-yard-line. The pick would set up a Roderick Davis rushing touchdown.

There were several victories to be had during Demopolis High School’s Homecoming game Friday against Sumter Central.

There was, of course, the game against the Jaguars.

There was also a friendlier competition between three young women for Homecoming Queen.

And then there was another kind of win that helps put everything in perspective.

The team made sure to take care of the game, securing a 42-6 victory over the visitors.

Perhaps a more important victory happened before the game when Antonio Nicholson returned to the Tiger sideline.

Nicholson lost a leg at the knee in an accident several months ago and has faced a long recovery.

He was introduced before as captain and stayed on the sideline for the contest, talking with teammates and other well-wishers.

“It’s unreal (for Nicholson to be on the sideline),” Causey said. “I’m so proud to see him back with the team.” 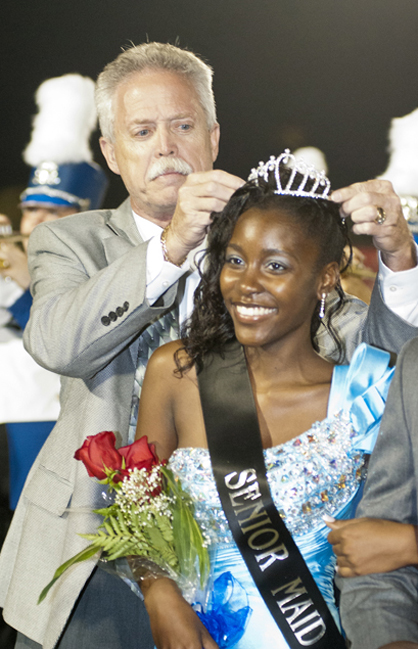 The victory over Sumter Central capped a great Homecoming Week at DHS.

“It was a good week. There were not a lot of distractions (for the team),” Causey said.

Demopolis dominated the first half against the Jaguars, scoring on offense and special teams.

The Tigers got their first points of a 15-yard pass from Tucker Jones to Demetrius Kemp.

Jones would score with his feet next, finding the end zone from midfield to put his team up 14-0.

Kempt would get the next TD, his second, on special teams. The junior scooped up a fumble on a Jaguar punt and rumbled 10 yards in for the score.

Roderick Davis would get in on the action next, scoring on 1-yard rushing TD he set up two plays before on a 37-yard dash.

The defense smothered Sumter Central, which barely moved the ball in the first half.

Tyler Oats intercepted the ball early in the second quarter and made it down to the 3-yard-line before being tackled. The pick set up Davis’ second rushing touchdown two snaps later.

Oats would make another big play, playing quarterback in relief of Jones. Oats pitched the ball to D.J. Howell for a 31-yard score.

The points at 8:42 to go before halftime would be Demopolis’ last of the night.

The second-half quarters were shortened to eight minutes and Sumter Central added a touchdown late in the third to cap scoring at 42-6.

Alston said she was surprised to hear her named called.

“I was excited and nervous,” she said. “I wasn’t really expecting it.”

She is the daughter of Timmy and Angela Alston and was escorted by her dad.

The rest of the Homecoming Court was also introduced. Other senior maids were Sommer Horshok and Regianna Wiggins.

Demopolis improves to 7-0 (5-0 in regional play) and go on the road next week to Satsuma.