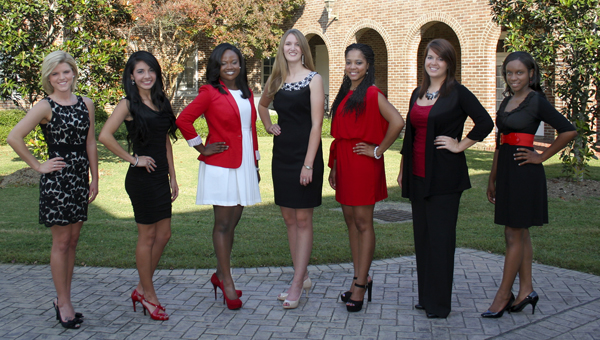 The University of West Alabama student body has elected seven of its most outstanding young women to represent them on the 2012 Homecoming court.

The homecoming queen, who is chosen from the five elected upperclassmen, is a well-guarded secret that will be announced during the annual Serendipity talent show Oct. 17. The other four nominees for homecoming queen will serve as the queen’s court, along with the freshman and sophomore maids.

Sheridan Galyon is the freshman maid. Galyon is a UWA majorette and an occupational therapy major. A Tuscaloosa native, she is a graduate of Paul W. Bryant High School. She has served as a UWA Ambassador and an orientation leader and is a member of Phi Mu fraternity. Galyon is the daughter of Mrs. Lisa Galyon and the late Bryan Galyon.

Tierra Robinson represents the sophomore class. Robinson is a member of the UWA Choir and Singers and Alpha Sigma Alpha sorority. She serves as a UWA Ambassador, a UWA Housing resident assistant and as secretary of Greek Council. The Eufaula native is majoring in integrated marketing communications and graduated from Eufaula High School. She is the daughter of LaShawn and Tony Robinson.

Angy Cuellar Aponte, a senior from Bogota Columbia, is a member of the Homecoming court. Aponte is a business administration major. A graduate of Gimnasio Iragua of Bogota, she is a member of several UWA organizations, including ENACTUS, for which she serves as executive vice president, Blue Key honor society, Delta Mu Delta, and Toastmasters. Aponte is a Spanish instructor at UWA Campus School and has been a team captain for UWA Tennis since 2009. She is the daughter of Nelson Cuellar and Martha Aponte.

Hanna Baker, a senior from Guin, is a member of the Homecoming court. Baker is pursuing a degree in sociology and psychology. A Marion County High School graduate, Baker is vice president of the Kappa Xi chapter of Phi Mu fraternity and is active in intramural sports at UWA. She is the daughter of Bobbie and Don Baker.

Teia Lee, a senior from Meridian, Miss., is a member of the Homecoming court. Lee is a psychology major, with a minor in theatre. A graduate of Northeast Lauderdale High School, Lee is a member of Alpha Psi Omega, Phi Eta Sigma, Blue Key honor society, Delta Sigma Theta sorority, for which she serves as chapter historian, and UWA Student Government Association. Lee has also served as stage manager for UWA Theatre productions. She is the daughter of Lisa Lee and Kip and Teresa Hodges.

Alesha McNeese, a junior from Ardmore is a member of the Homecoming court. McNeese is a pre-med biology comprehensive major. A graduate of Ardmore High School, McNeese is a member of Alpha Sigma Alpha sorority, the Scarlet Band from Tiger Land, UWA Choir and Singers, and Alpha Epsilon Delta. She works for UWA’s Livingston Press and has served as a UWA Ambassador. McNeese is the daughter of Connie and Dwight McNeese.

Chelsea Tucker, a junior from Linden, is a member of the Homecoming court. Tucker is majoring in athletic training. A graduate of Linden High School, Tucker’s campus involvement includes the Scarlet Color Guard, Student Support Services, Delta Sigma Theta, the campus newspaper, and yearbook. Tucker has also served as a UWA Ambassador, a UWA Housing resident assistant, and an orientation leader. Tucker is the daughter of Costella and Clyde Duke.

The court will ride through downtown Livingston in the Homecoming parade Saturday, Oct. 20, at 10 a.m. Crowning of the queen and presentation of her court will take place during halftime of the UWA-Shorter College football game at Tiger Stadium. Kickoff is at 3:30 p.m.