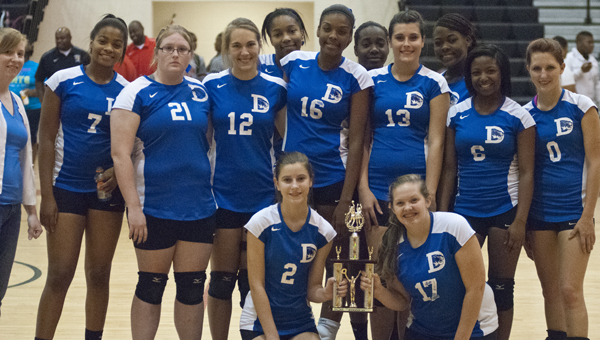 By finishing second in their area tournament Thursday, the Demopolis High School volleyball team qualified for the Super Regional tournament.

DHS beat Selma in five sets on Thursday and then lost to hosts Sumter Central in four sets.

In the match against Selma, the Lady Tigers won the first set 25-19. They had to come back from an early 9-0 deficit in order to win the set. They dropped the second set 25-17 after falling behind 17-7. They did not get discouraged with the loss, though, and came back and took set three 25-17.

In the fourth set, Demopolis got out to an early lead, but gave it up as the set went on. The Lady Tigers lost this set 25-22. They once again bounced back in the fifth and final set against Selma and won by a score of 15-8. This gave the Tigers a chance to play Sumter Central for the area championship. 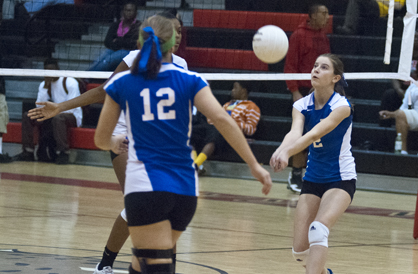 In that match, the Jaguars took the first set 25-21, even though the Tigers fought hard to stay in it. The second set was was very similar to the first, except it went the other way and the Tigers took it 25-22.

The third set was not as close. Demopolis fell into a large hole and could not dig out of it, and dropped the set 25-14. This gave Sumter Central a 2-1 set advantage over Demopolis heading into the fourth set.

In the most exciting set of the day, the Tigers and Jaguars went back-and-forth throughout the set. Demopolis gave up an early lead, but kept battling back when they fell behind. After tying the set at 17, Ebony Moore made a big play for the Tigers that gave them enough momentum to carry them to a 20-17 lead. The Jaguars battled back again, though, and took a 24-22 lead.

It looked like the match might be over, but the Lady Tigers kept fighting and tied the set at 24, and again at 25. They ran out of steam, though, and fell to Sumter Central 27-25 in the fourth and final set.

Head coach Blythe Smith was pleased with her team’s performance all day, and looks forward to preparing for the Super Regional tournament in Montgomery on Oct. 26.

“We played hard all day,” she said. “We worked hard against Selma and got that win, and we played well against Sumter Central but came up short. I’m glad to walk out of here with a trophy.”