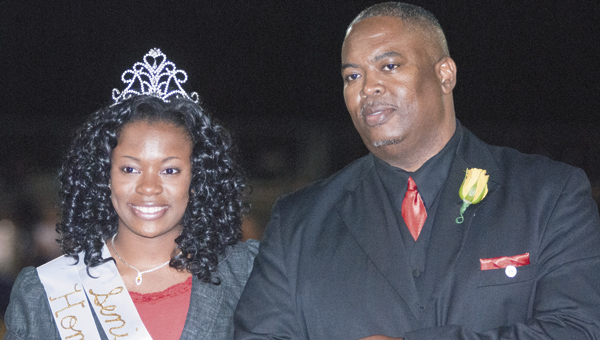 The Sweet Water Bulldogs defeated an undermanned Choctaw County Tigers team during Friday night’s homecoming game by a score of 34-14.

The Bulldogs jumped out to an early 20-0 lead in the first quarter and never looked back. Head coach Stacy Luker pulled his starters after the first and let his second and third team get a good amount of reps the rest of the game.

The Bulldogs opened the scoring on their first play of the game after forcing a Tigers three-and-out. Jakoby Aldridge took a handoff 22 yards for a score.

On the Bulldogs next possession, again on the first play of the possession, Jarvis Lewis took a handoff 52 yards for a touchdown. Sweet Water’s third and final possession of the first quarter ended in a 12-yard run by Deion Waters.

In the second quarter, Sweet Water kept the momentum and scored on a 26-yard Lewis run with 11:01 on the clock to make the score 27-0. The final score of the night for the Bulldogs came on an 11-yard Waters run in which he bulldozed a defender at the goal line.

On the final play of the first half, a couple of missed tackles allowed Choctaw County to score on a 42-yard run.

The second half was shortened to 8-minute quarters, and in the third quarter, there was no scoring by either team. In the fourth with 2:24 to play, Choctaw County broke another long run, this one from 73 yards out, because of missed tackles to bring the score to 34-14.

Luker said the goal in this game was to get the starters out early and let the backups get some reps.

“We wanted to get people out of the game,” he said. “We took the starters out, and we weren’t worried about the score.”

He added that his second and third team hasn’t had a lot of reps this year because of the close games they have been in, and it showed.

“We didn’t take care of the ball with them in the game very well,” he said, “and we missed some tackles that led to both of their touchdowns.”

He also said that next week’s game against Mobile Christian is a big one, seeing as it is for the region championship.

“The game next week is for the region championship,” he said. “We gotta get ready for that game. They have a great team.”