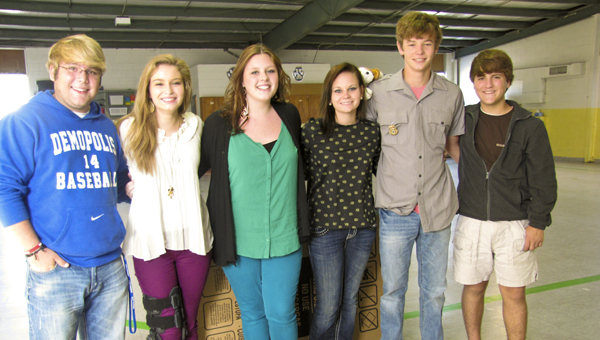 Students demonstrated the dangers of talking to strangers through a skit presentation. Shown from left to right are the students involved Will Tucker, Sydney Pettis, Taylor Cooper, Bailey Petrey, Logan Boone, and Houston Davis. Not pictured is Kathlene Saliba and Walker Davis.

DECA students at Demopolis High School have recently developed a campaign teaching small children the danger of talking to strangers, which lends to the name of their effort, “SCREAM: Stranger Danger!”

“We decided to start something that hit home with both of us,” Bailey Petrey, 15, said. “I have a four-year-old brother and my partner on the project has a three-year-old brother that we both want to stay safe.”

DECA is a club offered in high schools around the nation comprised of marketing students.

Petrey teams up with Logan Boone, 17-year-old DHS student, for the project, which involves a skit and discussion about the dangers of talking to strangers.

The two have presented their skit with the assistance of help from other students at Westside Elementary, Tender Years Daycare and Stay & Play Christian Nursery.

Sydney Pettis, Kathlene Saliba, Taylor Cooper, Will Tucker, Houston Davis and Walker Davis all are among the DHS students that aided Petrey and Boone with the skit.

“I hope children are more educated about it after they see our skit and know what to do if they are ever in a situation,” Boone said. 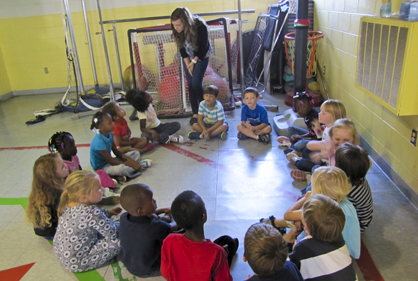 DECA students at Demopolis High School have recently developed a campaign teaching small children the danger of talking to strangers. Shown is Kathlene Saliba, DHS student, with a group of kids at Westside Elementary.

The skit involves high schoolers posing as though they are children walking home from school and they are approached by a man, “the stranger,” attempting to lure them with candy.

Throughout the skit, they talk with the children watching so they can learn the dangers if they decide to walk away with the stranger.

Ultimately, a high schooler, presented as the police officer in the story comes to take the man away.

“I hope children learn a lot from the presentation especially around Halloween to stay with a parent or a friend,” she said. “I also hope they learn to scream for help if they need it because one scream can make all the difference.”

If any school or organization is interested in the DECA students coming to present to a group of children, they can contact Connie Davis, DECA advisor at Demopolis High School.